The Irish Times view on global displacement: lives in limbo 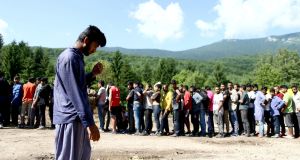 Migrants waiting for food and clothes at the migrant camp Vucjak, in Bihac area, Bosnia and Herzegovina, on Wednesday. Photograph: Antonio Bronic/Reuters

More than 70 million people are now forcibly displaced – double the level of 20 years ago, according to new figures from the United Nations refugee agency, UNHCR. Even that number – a global record – is conservative; for instance, some four million Venezuelans are known to have left their country, making that one of the world’s biggest displacement crises, but only half a million of those individuals have to date made asylum claims. Overall, the total global refugee population is at the highest level on record – 25.9 million, a figure that includes the 5.5 million Palestinian refugees under the mandate of the UN Relief and Works Agency.

The UNHCR’s Global Trends report is an essential, rigorously produced counterpoint to the falsehoods and misleading impressions created by Europe’s nationalist parties. The numbers underline, for example, that by far the largest proportion of refugees and asylum seekers reside not in the world’s richest states but in developing countries with comparatively fewer resources to provide for their needs. That’s because the vast majority of newly displaced people remain close to home. Most Syrians fled to neighbouring Turkey, where there were half a million new refugee registrations and asylum applications last year. Most of those forced to flee South Sudan went to Sudan or Uganda, and most of those displaced from the Democratic Republic of Congo also made their way to Uganda. As a result, the main countries of asylum were Turkey (3.7 million), Pakistan (1.4 million) and Uganda (1.2 million).

With refugees, as the UNHCR points out, the best solution is being able to return home voluntarily, in safety and dignity. Fewer than 595,000 refugees were able to do that last year. For those for whom that option is closed off, other solutions include being integrated into the host community or resettled to a third country. Under both of those headings, the world’s collective effort is scandalously lacking. Just 62,000 refugees were naturalised last year. A further 92,400 were resettled – less than 7 per cent of those waiting, often in intolerable conditions, for sanctuary.