The Irish Times view on Germany’s economy: An interesting guide 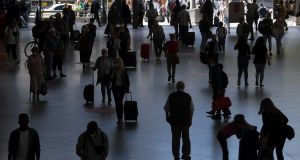 Ireland needs to keep a close eye on the performance of international economies for two clear reasons. One is that, as a trading nation, growth in our major markets is a vital national interest to us. The second is that events abroad can provide pointers to the impact of Covid-19 and how to try to respond.

In this light, recent news from the EU’s largest economy, Germany, could be interpreted in a glass half full or half empty fashion. Economic output fell by a jarring 9.7 per cent in the second quarter, compared to the first However the decline was a bit smaller than earlier estimates and less than the double-digit quarterly GDP falls in France, Italy, Spain and the UK. Also, separate business confidence survey data continued to show an improvement in expectations for the months ahead.

The signs so far are that Germany’s management of the crisis, its strong fiscal position and the structure of its economy, have all provided some protection. Its manufacturing sector has largely kept going and State supports under the Kurzarbeit scheme have been extended until the end of 2022. Germany entered the crisis in a strong financial position and, while now heavily in deficit, has had the firepower to offer extraordinary support to its businesses.

Yet it is also facing the same problem as other economies – how to reopen as virus numbers rise again. There is great uncertainty across the world and fears that the initial bounceback from the shutdown could stall as confidence is hit and restrictions of some sort are reimposed.

Ireland will also be watching the policy response in countries like Germany. The decision to extent the Kurzarbeit scheme – which subsidises the wages of employees put on short-time work – is interesting. Irish officials are looking at a similar proposal for here, once the existing wage subsidy scheme runs outs next April. If there is no vaccine by then, such a measure may be necessary, though it does not answer the question of what is done with sectors which have little or no money coming in the door.