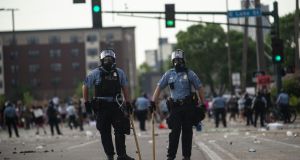 Two police officers stand outside the Third Police Precinct during the ‘I Can’t Breathe’ protest on Wednesday in Minneapolis, Minnesota. The station has become the site of an ongoing protest after the police killing of George Floyd. Photograph: Stephen Maturen/Getty Images

Joe Biden “joked” that African-Americans considering voting for Donald Trump “ain’t black”. He has apologised. But the cat was out of the bag, and the Democratic presidential candidate’s gaffe, seen as presuming on the African-American vote, had again offered the president an open goal. Within a day the campaign of a man who is widely seen as racist was selling T-shirts that read “#YouAintBlack – Joe Biden”.

There’s no escaping the race issue in the US. Interwoven into the two big stories of the day – the pandemic and the election – racial undercurrents continue to surface in this deeply divided society.

Why? A different age profile, endemic poverty and unemployment, overcrowding in poor housing and weaker health facilities are among the reasons. Meanwhile, those inequalities are reflected in a justice system that seems incapable of shaking off its historic institutionalised racism.

In Minneapolis this week there were riots over a police killing of a black man – a video shows George Floyd (46) groaning “I can’t breathe” as a white policeman kneels on his neck. Four police officers have been fired. Repeated similar deaths have been a driving force of the Black Lives Matter movement.

About one in 1,000 black men and boys in the US can expect to die at the hands of police, a rate 2.5 times higher than for white men. And, while one-ninth of the population, African-Americans represent a third of the prison population and are incarcerated at nearly six times the rate of whites.

A recent poll suggests 82 per cent of black voters will support Biden, to 4 per cent for Trump.

1 Coronavirus: One death, 25 new cases reported in State
2 This charming man: how Paschal Donohoe won the Eurogroup presidency
3 ‘My rent here is so low it’s a joke’
4 Goodbody’s planned €155m sale to Bank of China falls through
5 Children who go abroad must self-isolate for 14 days before return to school in September
Real news has value SUBSCRIBE