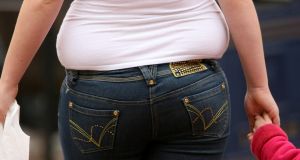 Increased obesity levels are fuelling a rise in the incidence of some tumours. File photograph: Anthony Devlin/PA Wire

According to the latest report from the National Cancer Registry (NCRI), the number of people with cancer is set to double in less than 30 years. And while the increase will be the result of a growing and ageing population, rather than any novel risk factors, it will place considerable extra pressure on our health services.

However, the frightening statistics of a 111 per cent increase in cancers among men to the year 2045, and an 80 per cent rise among women, are ameliorated by recent cancer trends. Using more current age-standardised cancer incidence rates, reflecting individual rather than population risk, the rise in cases could be limited to 50 per cent.

It is encouraging to see the rates of certain cancers decline as a result of preventive measures such as reduced smoking. On the other hand, increased obesity levels are fuelling an increase in some tumours. The NCRI says there will be a particular increase in the incidence of liver, gall bladder and biliary tract cancers. Breast cancer cases could see increases of up to 63 per cent by 2045.

As a result there will be a need for additional capacity in our national network of eight cancer centres in order to provide surgery, radiotherapy and chemotherapy for an extra 43,000 patients. It is vital that funding for the cancer control network keeps pace with this increased demand. A separate NCRI report found that patients first treated or diagnosed in one of the eight designated cancer centres had higher survival rates overall than those seen in other public hospitals.

But the Irish Cancer Society has flagged concerns that inadequate funding is being provided to deliver existing services to a growing number of cancer patients. It claims the National Cancer Control Programme allocation for 2019 will not enable the service to match referral demands in areas such as radiotherapy, rapid access cancer clinics and diagnostics. Any loss of momentum in the delivery of the national cancer strategy must be reversed without delay. A failure to meet current diagnostic and treatment targets does not augur well for the additional demand predicted by the latest cancer report.