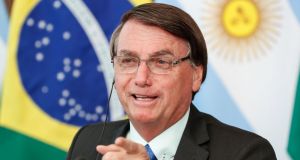 First Donald Trump, then Jair Bolsonaro. In the aftermath of significant election defeats for the populist twins of America north and south, some are suggesting we can start writing the political obituaries of both men and their similarly toxic brand of politics and contempt for democracy. Not yet, however. We have no idea what shape Trump’s second coming will take, and Brazil’s president, although taking a drubbing in bellweather municipal elections, remains firmly in office, the elections perhaps at best a harbinger of future prospects.

Bolsonaro suffered big losses in the just-completed municipal elections, with only five mayoral candidates supported by him winning their races, none in the most important cities. In his hometown Rio de Janeiro, Mayor Marcelo Crivella, an evangelical bishop who leaned heavily on the president in his campaign, was battered in a runoff election on Sunday, losing by two to one to centre-right predecessor Eduardo Paes.

In the first round in the 5,000 municipalities two weeks ago, Sao Paulo, Brazil’s biggest city – population over 12 million – gave just 10 per cent to Bolsonaro’s candidate. The beneficiaries there and across the country have been mainstream parties of the centre-right and centre-left, with voters also most reluctant to support the other big beast of Brazilian politics, the Workers Party (PT), which governed Brazil between 2003 and 2016.

The party of the once-hugely popular former president Luiz Inácio Lula da Silva failed to win the mayorships of any important cities and its support is still less than half what it was in 2012.

The PT and Lula have still not shaken off the taint of Brazil’s long-running Car Wash corruption scandal and younger voters appear to be looking elsewhere. It looks very doubtful that the rest of the Brazilian left will be willing to unite against Bolsonaro behind the ageing PT, with Lula – who left prison just a year ago after serving time for corruption – again as their joint presidential candidate. Early talks on an alliance for 2022 have not been fruitful.