The Irish Times view on the European Commission nominees: ignore the special pleading 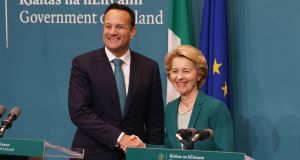 When she reshuffles her college of commissioners this week, European Commission president Ursula von der Leyen should pick the most suitable and qualified candidates for each role, regardless of where they come from. This ought to be self-evident. In most organisations, it would be. But the intense lobbying from European capitals – not least Dublin – as well as from the larger European political groups, each eager to place their people in positions of influence, reminds us of the minefield von der Leyen must now navigate.

The reshuffle was necessitated by the resignation of Phil Hogan, the Irish former TD whose attendance at an Oireachtas Golf Society dinner last month, an event that was apparently in breach of public health guidelines, made his position untenable. Rightly determined to ensure gender balance among her commissioners, von der Leyen asked Dublin to suggest two candidates to succeed Hogan – a woman and a man.

After a protracted period of dithering, Fine Gael chose its MEP Mairéad McGuinness and former party adviser Andrew McDowell. They will be interviewed by the commission president this week, with McGuinness widely expected to be preferred. She is so clearly the favourite, in fact, that the Government should have nominated her alone. That would have helped von der Leyen in her effort to achieve gender balance while meaning Ireland retained its prerogative to choose its commissioner.

When she makes her selection, von der Leyen should ignore lobbying for specific posts from Dublin and every other member state and political grouping. It’s her right to assign portfolios as she sees fit, based on her assessment of the skills and experience of her commissioners and the overall composition she believes she needs to implement her agenda. The challenges facing the European Union, and the commission as its policy engine-room, are far too great to allow the effectiveness of the institutions to be compromised by the states’ all-too-narrow conception of their own influence.