The Irish Times view on Rwanda: An arrest in Kigali 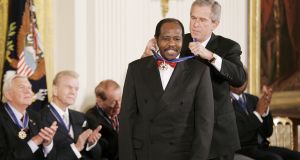 Paul Rusesabagina’s appearance in handcuffs in Kigali on Monday has caused widespread concern internationally. The businessman, whose role in sheltering some 1,200 from the Rwandan genocide in 1994 was celebrated in the film Hotel Rwanda, appears to have been kidnapped in Dubai by the Rwandan authorities or secretly extradited on an “international warrant” issued by Rwanda, a Dubai ally.

He will face charges including terrorism, arson, and murder and is accused of controlling terror groups based outside Rwanda. Police claim he called in 2018 for armed resistance to the government on a Youtube video.

Rusesabagina, who has lived in Belgium and the US for some years, had become a vocal critic of Rwanda’s President Paul Kagame. The former commander of the Rwandan Patriotic Front, which ended the country’s genocide, Kagame became its de facto leader and then president in 2000.

He has been re-elected ever since in polls that have drawn international criticism and won nearly 99 per cent of the vote in the last election. One of his main opponents, Diane Rwigara, was jailed with her mother for more than a year on charges that judges later dismissed.

His government has become increasingly authoritarian and Kagame’s early reputation as a force for modernisation and democratic reform in Africa has all but dissipated. He has stifled independent media and political opposition, linking dissent with deeply taboo genocide denial.

Rusesabagina, a middle class Hutu married to a Tutsi, was manager of the Mille Collines Hotel in Kigali in 1994, and gave shelter to up to 1,200 people fleeing from machete-wielding Hutu mobs. In the aftermath, his role was widely celebrated at home and abroad where he was known as an important human rights activist.

But the Kagame regime began to claim that he had exaggerated it when he became aligned with opposition parties. Rusesabagina fled into exile. His family insists that he is not back in Rwanda of his own volition, and their call for a trial before an international tribunal should be supported.