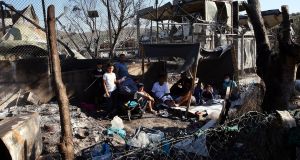 Asylum seekers sit amid the debris after the fire in the Moria refugee camp on the island of Lesbos. Photograph: Orestis Panagiotou/EPA

The overnight fire that destroyed the refugee camp at Moria on Lesbos was a disaster waiting to happen. Long-term overcrowding and an outbreak of Covid-19 have fed tensions in the 13,000-strong camp, four times its official capacity, and with an increasingly angry local community frustrated at Athens’s failure to move the refugees on. Although no deaths were reported, officials spoke of “complete destruction” – only a medical facility and small clusters of tents were left untouched.

Lesbos, a few miles off the Turkish coast, has long been on the frontline of the migrant crisis, a draw for men, women and children from Afghanistan, Syria, Iraq, Pakistan and western Africa. Rickety boats arrive every day from Turkey, and Moria has long been criticised by aid groups and doctors for its appalling living conditions.

The immediate cause of the fire is not yet clear but resentment among refugees at their conditions meant firefighters met stiff resistance, rocks and stones, as they tried to douse the flames. The fires spread quickly because of high winds and the explosion of gas canisters.

Authorities had placed the camp under quarantine last week and there are now 35 confirmed Covid-19 cases. The situation has been no better in other camps on nearby Greek islands. Across the islands before the fire, more than 23,000 people were crammed into camps built for just 6,000, according to aid groups. The growing tensions on the islands have led the conservative Greek government to step up expulsions back to Turkey and the government reportedly abandoned more than 1,000 migrants in rafts at sea.

The immediate need is for tents and basic supplies but the tragedy has brought badly needed attention to the longer term future of stranded refugees in a Europe that is increasingly hostile to them. EU leaders promised immediate help and there were a few offers of resettlement – one German region agreed to take 1,000 of the camp’s inhabitants as part of a wider resettlement scheme. But a new urgent focus in Brussels on a common resettlement strategy is the central priority.