The Irish Times view on schools: now to keep them open 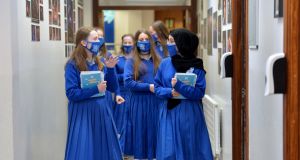 Transition year students wearing face masks use a one-way system along the corridors on their first day back at school at Mount Sackville Secondary School in Chapelizod, Dublin. Photograph: Alan Betson

The reopening of schools across the country, which has allowed children to return to the classroom after a difficult six-month hiatus, is an important milestone in the coronavirus response. It’s too early to know whether the measures put in place to mitigate the risks of infection in schools will be adequate, or whether enough has been done to prepare for the multitude of contingencies that lie ahead, but it’s to the credit of Government and teachers that classroom teaching has resumed on schedule for the new term.

The reopening is not without risks. That’s true of nearly all our daily activities in this unsettling new world, unfortunately. But given the well-documented damage of school closures on children, particularly those in disadvantaged areas and those with disabilities and additional needs, reopening had rightly become a national imperative.

In order to do that, it was vital to ensure those risks could be reduced as much as possible and that there were adequate protocols in place to deal with the outbreaks of Covid-19 that would – will – inevitably occur. The Department of Education was slow to get to work on the reopening, seeming at times consumed by its own dithering on the Leaving Cert, and many teachers and parents still feel there are many unanswered questions, not least regarding the position of teachers with pre-existing conditions and how special needs assistants can work under the new regime.

Almost half of secondary schools are having problems hiring builders to carry out works to allow for physical distancing requirements, according to a survey by the Teachers’ Union of Ireland.

A huge amount of work has been compressed into a few weeks, and a great deal of money has been spent in making this happen; not until the system is tested, however, will we know whether it has been enough. And while the Government will be relieved to have passed this milestone, it must know that the release of Leaving Cert results next week, if it goes badly, could send the Department of Education back into crisis mode.

Teachers and parents can only do so much. Keeping children in the classroom will require a sustained societal effort to keep community transmission of the virus under control, because ultimately that is the only way of keeping it out of the classroom. We must also make sacrifices elsewhere. In recommending that pubs remain closed and gatherings be limited in size, the National Public Health Emergency Team has in effect come up with a trade-off: older adults are being made to reduce their close contacts and thereby starve the virus of opportunities to transmit so that younger people can have the higher number of contacts that classroom education requires.

Getting children back to school is a big achievement. Keeping them there will be an even bigger one.