Sources in Dublin dismiss plan, saying it contains no credible alternatives to backstop 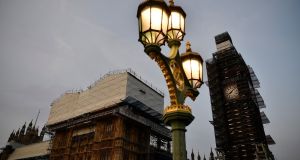 The House of Commons is set to vote on amendments to Theresa May’s Brexit plan in parliament on Tuesday. Photograph: Neil Hall/EPA

Leading Conservative Brexiteers and Remainers have produced a joint proposal to replace the Northern Ireland backstop with tariff-free trade and technological measures to keep the Border open.

The proposal emerged from secret negotiations between Remainers including former education secretary Nicky Morgan and Brexiteers including Jacob Rees-Mogg and Steve Baker.

It would oblige Theresa May to renegotiate the withdrawal agreement to include an alternative to the backstop based on Brexiteer proposals for “maximum facilitation” of customs and tariff-free trading arrangements. The United Kingdom and the European Union would not be treated as a single customs territory, as they would under the current backstop proposal.

Both sides would instead agree to “specific facilitations and measures to ensure that no physical infrastructure is required in respect of movement of goods across the Irish border”. Customs formalities and inspections would “to the extent possible” be dealt with away from border crossing points.

Sources in Dublin were dismissive of the plan, and said it contained no credible alternatives to the backstop.

It was also claimed that the plan was merely a repackaging of a plan called “maximum facilitation”, which largely relied on technology to keep the Irish Border open and which was dismissed very early in the Brexit process.

Under the proposal, dubbed the Malthouse compromise after Conservative MP Kit Malthouse who hosted the talks, would see Britain pay the £39 billion (€44 billion) divorce bill in full and extend the transition period to three years.

The second part of the proposal outlines the terms of a “managed no-deal” if Britain and the EU fail to agree a comprehensive trade deal within three years.

“The first part of it is to recast the backstop as a sort of free-trade-agreement-lite. That would involve a commitment by all sides to have no hard border on the island of Ireland but allow trade to continue, while there is a slightly longer implementation period till December 2021,” Ms Morgan said.

DUP leader Arlene Foster gave her party’s support to the Malthouse compromise. “We believe it can unify a number of strands in the Brexit debate including the views of Remainers and Leavers,” she said.

The DUP leader said: “There is no better time to advance this alternative given the confusion and disarray which is now manifesting itself in Brussels. This has been displayed both by the contradictory EU statements and the panic-stricken behaviour of the Irish Government.”

However, senior EU diplomatic sources dismissed the proposal as “fanciful” and “desperate”, predicting EU leaders would reject it immediately if Mrs May were to present it for negotiation in Brussels.

Mrs May has told Conservative MPs that she will seek to replace the Northern Ireland backstop with alternative arrangements to prevent a hard border.

The British prime minister urged them to vote on Tuesday for an amendment calling for her Brexit deal to be approved on condition that the backstop is replaced.

International Trade Secretary Liam Fox has urged Conservative MPs to give Mrs May a “strong mandate” to return to Brussels to negotiate changes to the controversial Northern Ireland backstop.

Ahead of the Commons votes that could help shape the next phase of talks with the EU, Mr Fox said the Mrs May was ready to reopen the Brexit Withdrawal Agreement to secure a legally binding text.

At a meeting of Tory MPs in Westminster on Monday, Mrs May called on them to get behind an amendment tabled by influential chairman of the backbench 1922 Committee Sir Graham Brady calling for “alternative arrangements” to the backstop.

Conservative MPs were informed they would be whipped to vote for the amendment – assuming it is selected by Commons speaker John Bercow.

Her hopes of gaining a Commons majority for the plan received an initial setback after Mr Rees-Mogg, the leader of the pro-Brexit European Research Group (ERG), said they were not prepared to support it and it did not change anything.

However, Mr Rees-Mogg suggested he could be prepared to support it if the amendment had official government backing.

Both the EU and the Irish government have been adamant that there can be no question of reopening the Withdrawal Agreement.

European Affairs Minister Helen McEntee, said: “There can be no change to the backstop. It was negotiated over 18 months with the UK and by the UK. A bit of realism is needed at this stage.”

In Dublin, the Cabinet was scheduled to discuss further preparations for a no-deal Brexit this morning when Minister for Finance Paschal Donohoe was expected to present a memo on its implications.

Mr Donohoe and Taoiseach Leo Varadkar have ruled out an emergency budget in the event of a no-deal outcome, insisting that the October budget was drawn up with Brexit in mind.

But the Central Bank warned last week that a no-deal Brexit would deliver a serious blow to the Irish economy, slashing projected economic growth this year. Sources said that they expected the Finance memos to be similar to the Central Bank expectations. – Additional reporting PA