The Irish Times view on Northern nationalism: the power of persuasion 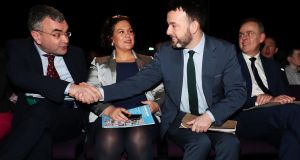 The size of the 1,500-strong crowd at the nationalist gathering in Belfast at the weekend and the depth of anger and frustration expressed by many of the speakers was a clear indication that things will have to change. While there is little doubt that the gathering served the interests of Sinn Féin and the party’s campaign for an early Border poll, it did represent a broader constituency, with all strands of nationalism represented.

The mood of the conference reflected the fact that the prospect of a united Ireland in the medium term is now the goal of a broad cross section of Northern nationalism. There is something truly ironic about the fact that this has come about because of the vote in favour of Brexit, something that was strongly supported by the Democratic Unionist Party (DUP) as a means of preserving the position of Northern Ireland as part of the United Kingdom.

The DUP’s subsequent behaviour in supporting the hardest possible form of Brexit, which increases the risk of the reintroduction of a hard Border on the island, has encouraged nationalists of varied hues in the North to come together in support of a campaign for unification.

Nationalists need to be careful, though, not to repeat the mistakes of the DUP by adopting an aggressive approach that will only undermine their cause. It was notable that there was little effort at the conference to reach out to the Unionist community to point out the potential long-term benefits of Irish unity.

One of the voices of realism was that of Colum Eastwood, who pointed out that the North is now a very different place from what it was in 1968 and nationalists are no longer second-class citizens in their own land. He challenged the dominant narrative of the conference that unionism as a whole was unchanging, opposed to basic rights and could not be worked with. He said nationalists had a duty to say to their unionist neighbours: “You belong to this place every bit as much as I do – therefore you have the very same right to shape the future of this island”.

This is the level on which any debate needs to take place if there is to be any prospect of a united Ireland in the medium term. Brexit and the behaviour of the DUP may prompt a reassessment within unionism of where its interests lie. However, measured and respectful argument rather than hostile rhetoric represents the best approach for nationalists seeking to convince unionists that a united Ireland is in the best interests of both communities.