Race for a Covid-19 vaccine: The Irish Times view

A handful of potential vaccines are showing promise 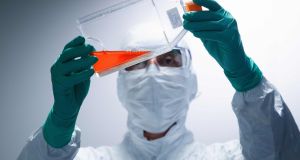 Scientists are pushing on with larger real-world trials and chasing the disease around the world in an effort to show a ‘durable response’. Photograph: Joel Saget/AFP via Getty Images

Across the world, the spread of Covid-19 is accelerating. A rising curve is evident in large countries where there is poor leadership, ineffective implementation of restrictive measures and poor testing and tracing regimes. There is “spring back” in some states, undermining initial successes, and lingering clusters in many European countries. At least some of the gloom, however, has been countered by progress in vaccine development.

A handful of potential vaccines are showing promise. Last week two in particular, one being developed at Oxford University and the other in China, provided real hope based on Phase 1 trials. Others continue to make progress, notably one being developed by the US biotech company Moderna. Russia, seeking to be first to produce a vaccine, is testing its version developed by the state-run Gamaleya Institute in Moscow on its business elite and top brass in the Kremlin – though supporting data has yet to emerge.

The Lancet published the data from the Oxford and Chinese candidates, suggesting they are safe and trigger two types of immune response. They stimulate decent levels of antibodies – proteins that can bind to the virus, preventing it from entering cells and flagging it to immune cells; and “killer” T cells – white blood cells that attack infected human cells. To deliver their payload, they use a harmless version of an adenovirus which causes a common cold in animal or human hosts.

It is unclear whether the levels of immunity can protect against infection. Nor is it known if these experimental vaccines can protect those most vulnerable to severe Covid-19 disease. The extent of lasting immunity has yet to be determined. But there are no good reasons for thinking the vaccines will be ineffective based on these results. Scientists are pushing on with larger real-world trials and chasing the disease around the world in an effort to show a “durable response”.

The Oxford team indicates one million doses of its vaccine being developed with AstraZeneca could be available in September. The World Health Organisation suggests a more realistic timeline would be early next year. In the meantime, a parallel process needs to be nailed down on distribution and administration of what, it is hoped, will be a range of vaccines to protect billions of people. When breakthroughs come, they must be affordable for healthcare systems and targeted at those in most need.

Wealthy countries such as the US and UK are already buying up huge stocks in advance, backed by the equivalent of billions of euros. A spying alert recently suggested hackers were hunting for Covid-19 data and vaccine research. Both activities are extremely worrying as they undermine unprecedented efforts to generate safe and efficacious vaccines through international collaboration and data-sharing by scientists.