UK tourists flying home after a holiday in Spain have reacted angrily to an abrupt decision by their government for mandatory 14 day quarantining on arrival home. Video: Reuters 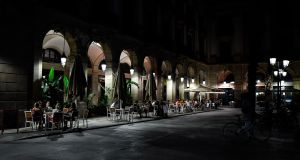 A terrace bar in Barcelona: Spain’s health ministry reported more than 920 new cases of Covid-19 on both Thursday and Friday. Photograph: Pau Barrena/AFP

Spain is scrambling to stay ahead of new outbreaks of the coronavirus that prompted the UK to impose a quarantine on travellers returning from the country, dealing a new blow to its tourism-dependent economy.

Only weeks after the UK included Spain on a list of countries safe for summer holidays, the government reversed course and announced late on Saturday it would impose a 14-day quarantine on anyone arriving from Spain. The move came after cases in the country jumped, particularly in the Catalonia region, where authorities are racing to stamp out new outbreaks.

Norway on Friday announced a 10-day quarantine for people returning from Spain, and France issued new travel warnings for the Catalonia region, which is home to Barcelona and popular beaches. The moves will further weigh on bookings in the peak travel period for a country that depends on tourism for more than 10 per cent of gross domestic product.

Spain’s health ministry reported more than 920 new cases on both Thursday and Friday, the highest numbers since early May, when the government began easing one of Europe’s strictest lockdowns. Most of those were in the region of

Catalonia in northeastern Spain, where authorities have been expanding restrictions to try to flatten the curve. In Barcelona, nightclubs have been ordered shut for two weeks and there is a midnight curfew on bars. A partial lockdown affecting 200,000 people has already been imposed in the western district of Segria.

TUI UK, the country’s biggest tour operator and a unit of the German travel company, suspended all its holidays to mainland Spain until August 9th, Sky News reported. The World Travel and Tourism Council called the UK decision a “bitter blow” for travellers and said local lockdowns, not broader travel restrictions, would be a better solution.

The Spanish government is trying to convince the UK government to exempt the Balearic and Canary islands, where infections are “far below” UK rates, from the quarantine order, foreign minister Arancha Gonzalez Laya said on Sunday. The two island regions are among Spain’s biggest tourist destinations for foreigners.

“Spain is a safe country,” Gonzalez Laya said. “Spain has outbreaks. As do other countries. What’s important is that Spain is making great efforts to control these outbreaks.”

Spain was one of the countries in Europe hardest-hit by the coronavirus and has already suffered more than 28,000 fatalities, the fourth-highest tally in Europe after the UK, Italy and France. A national lockdown started in March had largely tamed the spread of Covid-19, but the easing of those restrictions and the start of the summer tourism season has contributed to an uptick, particularly among young people frequenting crowded bars and clubs.

Cases in neighbouring France, which has more than 30,000 fatalities, have also been climbing, with new infections topping 1,000 on some days.

“We’ve returned to levels comparable to those at the end of the lockdown period,” the public health agency said in its daily statement on Friday. “We’ve thus erased a good part of the progress that we had accomplished in the weeks after the lockdown was lifted.”

Countries around the Mediterranean were praying that a glimpse of tourism would get them through the summer before the cold snap drives people indoors and ushers in a second chapter to the pandemic. Now, it appears the spread of the virus may not wait for the winter months. – Bloomberg