Overseas aid: a need for coherence 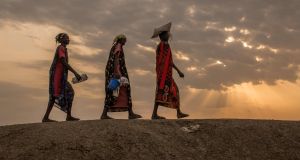 Internally displaced women walk to a food distribution in the early morning at the Protection of Civilian site (PoC) in Bentiu, South Sudan, earlier this month. The site was established in January 2014, when 7,000 civilians entered the UN base to seek protection, shortly after the start of the South Sudanese civil war. The camp hosts over 20,000 households and the numbers keep rising every day. Photograph: Stefanie Glinski/AFP/Getty Images

Overseas aid is something of an anomaly in Irish policy-making. Expensive yet largely uncontroversial, it attracts positive reviews from across the world and, despite commanding a large budget, has seldom come in for sustained attack. To the credit of successive governments, all Irish aid spending – €707 million last year – is untied, meaning it does not come with trade or other conditions attached, yet the commitment it shows undoubtedly strengthens Ireland’s standing in the international arena. More importantly, the aid programme helps to save lives and lift people out of poverty.

The case for aid has never been stronger. In recent years huge strides have been made by developing countries and rich donors working together. Malaria mortality has fallen by nearly 50 per cent since 2000, saving almost seven million lives. Tuberculosis infections are down by 25 per cent, and the world is close to eradicating polio. The list goes on. Yet a series of crises have caused a spike in humanitarian need. Sixty-five million people are displaced by war and conflict, according to the UN, and 14 million are in need of humanitarian assistance. These problems are compounded by global warming, a widening income gap and rising populations.

In Britain and elsewhere, advocates of foreign aid are perpetually on the defensive against ideologues who question its effectiveness. That’s a stale debate – years of independent research has shown the positive impact of aid on development and living standards, and among experts the discussion long ago moved on from the “does aid work?” debate to questions about how aid must adapt to new challenges in a rapidly changing world. Happily, that’s the focus of a new report from the Oireachtas Committee on Foreign Affairs, which underlines the bipartisan consensus on Irish Aid but makes useful suggestions on ways in which the programme can be developed.

A key recommendation is that the Government should give a firm commitment to spending 0.7 per cent of national income on foreign aid by 2030. That’s a good idea, and legislation to underpin it would be a useful signal of intent. Meeting that target would bring Irish Aid spending to about €2.5 billion a year, and any such increase must be accompanied by enhanced oversight, control and governance structures.

Policy coherence is critical. It would be a mistake to think of foreign aid purely as an activity for the Department of Foreign Affairs. Rather it requires input and buy-in across government. For example, while Irish Aid trumpets its work to alleviate the ill-effects of global warming on the world’s most vulnerable people, the Government of which it is a part actively contributes to the problem by missing its climate action targets and showing a distinct lack of ambition to play its part in addressing the causes of the crisis.

1 Bank leaked my loan request to family who tried to rip me off
2 Why Sinn Féin will not call the State by its name
3 Spread of coronavirus triggers European travel curbs
4 Ryanair and Aer Lingus monitor impact of coronavirus on travel to Italy
5 What evidence is there that the IRA still controls Sinn Féin?
Real news has value SUBSCRIBE