The State remains below the threshold where 95 per cent of the population are immune to measles, mumps and rubella 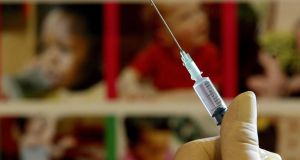 Had vaccination levels exceeded 95 per cent of the target population, measles may well have been eradicated by now. Photograph: Gareth Fuller/PA

In an ideal world the current outbreak of measles in Limerick and Dublin would not be happening. Ireland would have established herd immunity against the infectious disease following years of childhood immunisation with the measles, mumps and rubella (MMR) vaccine. Had vaccination levels exceeded 95 per cent of the target population, measles may well have been eradicated by now.

However, the damage done by disgraced gastroenterologist Andrew Wakefield, when he published fraudulent research in The Lancet in 1998 claiming a link between the MMR vaccine and autism, continues. That he was struck off the UK medical register and had his paper retracted by the medical journal has yet to restore full confidence in one of the safest vaccines available to us.

With the 12 confirmed measles cases in Limerick set to rise as the disease takes a foothold in the community, public health authorities have mounted an outbreak response.

As MMR vaccine uptake rates range between 90 and 94 per cent, we remain frustratingly below the threshold where 95 per cent of the population are immune to measles, mumps and rubella. We are not alone. Some 14 countries in the World Health Organisation’s European region remain endemic, including France, Germany, Poland, Switzerland and Romania. In all of these countries, estimated national immunisation coverage with the second dose of MMR vaccine (administered at 4-5 years) is less than the threshold required.

Why has confidence in vaccines not returned fully? US president Donald Trump has given succour to the “anti-vaxxer” movement by tweeting about vaccines and autism. Alt-right movements have perfected false news campaigns on social media, and their methods have been taken up by anti-vaccine campaigners worldwide. Vaccines are presently one of the key targets of fake news.

There is a need for coordinated action by governments to tackle these campaigns. As one of the greatest medical advances, vaccines must be allowed perform their life-saving role.

1 Covid-19: Hairdressers, gyms and religious services could return next week
2 Bloomberg ranks New Zealand top in fight against Covid-19 - but how did Ireland fare?
3 The beginning of the end: 10 things to know about Covid-19 vaccines
4 Alison Curtis: My guilt at not going for a second pregnancy
5 How to gift your child a house deposit . . . tax free
Real news has value SUBSCRIBE