Syria: the world must stop the slaughter

Western powers refuse to intervene, the UN stands impotent and Moscow shows no inclination to use its leverage 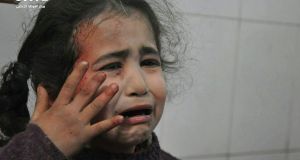 A photo released on Wednesday, provided by the Syrian anti-government activist group Ghouta Media Center and authenticated based on its contents and other AP agency reporting, shows a young Syrian girl who was wounded during airstrikes and shelling by Syrian government forces. Photograph: Ghouta Media Center via AP

The battlefield defeat of Islamic State over the past year produced a mistaken assumption that the Syrian conflict was winding down. As the horrors of recent days demonstrate, the seven-year war remains ferociously intense and could yet escalate further.

The war is best understood as three separate but overlapping conflicts, each one involving international players or their proxies who have an eye on safeguarding their interests on the postwar map of Syria. First, the battle against Islamic State has turned into a rout. Kurdish-led forces, backed by the United States, have run the jihadists out of their de facto capital, Raqqa, and, along with Syrian and Russian forces, pinned them into a number of small enclaves. But as Islamic State’s territory contracts, its scattered fighters are widely expected to turn towards insurgency tactics.

Reports tell an unspeakable story of whole families wiped out, hospitals destroyed, queues for what little food remains and utter destruction of infrastructure

The second front, in northern Syria, is dangerously poised and could yet draw major powers into direct confrontation. The success of factions drawn from Syria’s Kurdish minority in carving out a de facto mini-state near the Turkish border has alarmed Ankara, which has its own large Kurdish minority. Turkey responded last month by attacking the Kurdish-held region of Afrin. Then, in recent days, gunmen loyal to Syrian president Bashar al-Assad began to enter Afrin to support the Kurdish militias there, setting up a potential clash between Syrian and Turkish forces.

The third conflict is that between Assad and the rebels who mounted an uprising against his rule in 2011. Russian intervention at Assad’s side tipped the balance in his favour, and today those rebels have been pushed back into their few remaining bastions. Throughout the conflict, Assad has pursued a scorched-earth campaign that has killed hundreds of thousands of people.

His latest target is Eastern Ghouta, a pocket of towns and farms near Damascus where nearly 400,000 people have been under government siege since 2013. Almost 300 people have been killed there since Sunday, and reports tell an unspeakable story of whole families wiped out, hospitals destroyed, queues for what little food remains and utter destruction of infrastructure. Aid workers said the latest violence in the area, where 1,300 people died in 2013 after the Assad regime deployed sarin gas, has included the use of indiscriminate barrel bombs.

It would be unconscionable for the world to stand idle, but that is exactly what is happening. Western powers refuse to intervene. The UN Security Council, hobbled by the Russian veto, stands impotent. Moscow itself shows no inclination to use its leverage to rein in Assad.

A political deal ending the conflict between Assad and Syrian rebels is crucial. But the priority must be to stop the massacre of civilians. The longer the international community allows it to continue, the more complicit it becomes.

1 Covid-19: Museums, cinemas, hairdressers expected to reopen next week
2 Bloomberg ranks New Zealand top in fight against Covid-19 - but how did Ireland fare?
3 Vitamin D supplement advised for older people
4 The beginning of the end: 10 things to know about Covid-19 vaccines
5 Coronavirus: 226 new cases and 6 further deaths reported in the State
Real news has value SUBSCRIBE