Sentencing: judges must be given guidelines

Concerns are growing over a wide discrepancy in penalties depending on the locality, crime rate and the judge involved 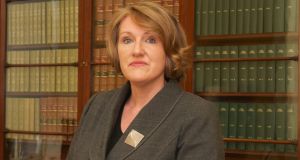 A request by Director of Public Prosecutions Claire Loftus to the Court of Appeal that it should provide sentencing guidelines in burglary cases is important. It reflects growing public concern over a wide discrepancy in penalties imposed for this offence, depending on the locality, crime rate and the judge involved. It also shows official frustration at the slow progress of the Judicial Council Bill through the Oireachtas.

The DPP based her request for judicial guidance on a case involving two cousins who embarked on a “spree” involving four planned burglaries in Limerick, during which a 62-year-old man collapsed and died. Appealing against “unduly lenient” sentences of 4½ years, with the final year suspended, counsel for the DPP referred to serious social problems caused by residential burglaries that caused people to live in permanent fear and dread. This became particularly acute, he said, when elderly, infirm or disabled people were involved or when persons in isolated rural areas became victims.

All criminal cases are different and judges, under the Constitution, are entitled to exercise their discretion in matters of punishment. At the same time, the public interest requires that confidence in the judicial system is not damaged by the imposition of widely divergent sentences. The absence of sentencing guidelines for judges contributes to this situation.

By asking the Court of Appeal to review this particular burglary case and, at the same time, to provide sentencing guidelines, the DPP appears to have lost patience with the pace of reform. It took more than a decade of fraught negotiations between governments and the judiciary to produce a Judicial Council Bill with disciplinary and other functions. One of those powers involves the production of sentencing guidelines. As things stand, such advice is only offered in cases of serious assault and firearms possession. In the UK, a great number of offences are covered.

A survey by this newspaper of District Court penalties in burglary cases found that two-thirds of those charged were sent to jail, with Dublin offenders most likely to be imprisoned. Elsewhere in the State, penalties fluctuated, depending on local crime rates and the judges involved. At Circuit Court level, more serious cases also attracted widely disparate sentences.

Inflamed public sentiment or political pressure, arising from particularly violent burglaries, should not dictate the response of the judiciary. A more balanced approach, providing greater uniformity in the treatment of offenders at District and Circuit court level, is required. Chief Justice Frank Clarke has signalled support for guidelines. That’s good. Early passage of the Judicial Council Bill would be a big step towards providing much-needed advice for judges.