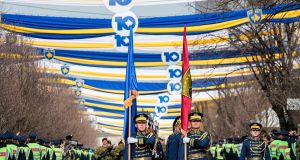 Members of the Kosovo Security Force ceremonial band parade in the main square in Pristina on the occasion of the 10th anniversary of Kosovo Independence. Photograph: Armend Nimani/AFP/Getty Images

Kosovo is taking down the bunting after its 10th birthday party and wondering where it will be in another decade – inside the European Union and Nato or stuck on their doorstep and still at odds with its former master, Serbia.

The 90-per cent Kosovar Albanian country of 1.8 million people trails its Balkan neighbours on the long road to EU accession, with only Serbia and Montenegro currently considered to have a chance of joining by 2025. Since formally declaring independence from Belgrade on February 17th 2008, Kosovo has been blighted by corruption, unemployment and poverty, but its leaders see its main problem as an obstructive neighbour to the north. They say Serbia’s refusal to accept Kosovo’s sovereignty not only bars it from the United Nations and other international organisations, but also stops it moving on fully from a 1998-1999 war and securing investment.

In unveiling enlargement plans for the western Balkans this month, the EU said candidate countries must solve their bilateral disputes before joining the bloc. Kosovo remains a touchstone issue for Serbs, however, and no leader in Belgrade would want to be remembered for giving away the supposed cradle of the nation’s history, culture and religion.

One suggestion is that Belgrade could somehow acknowledge the fact of Kosovo’s sovereignty without formally recognising it, but such a fudge may not be acceptable to several EU states that are deeply sceptical about further enlargement. Some Serbian officials propose recognition in exchange for the partition of Kosovo, with mostly Serb-inhabited northern areas coming back under Belgrade’s control, but any land swap could trigger a domino effect across the Balkans.

Western diplomats may disapprove of President Aleksandar Vucic’s grip on Serbia, but they know it could keep the country’s strong nationalist element in check if he did agree terms with Kosovo. Tough decisions lie ahead – for Kosovo, Serbia and the EU – if the next decade is to bring success and security rather than stagnation.