Abortion: the need to engage and explain 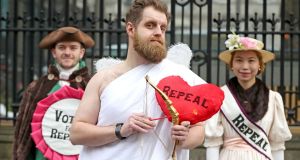 Three weeks have passed since Taoiseach Leo Varadkar fired the starting gun for the abortion referendum campaign after a late-night Government meeting to formally sign off on the plan. That important step, coming as it did 10 days after a surprise announcement by Fianna Fáil leader Micheál Martin that he would vote to remove the constitutional ban on abortion, energised pro-choice supporters and injected momentum into their campaign.

Since then, however, there has been an unmistakable sense that that momentum has stalled. Preoccupied with other issues, Ministers have gone quiet on abortion. At the same time, two developments have underlined the scale of the task the repeal side faces. First, anti-abortion campaigners, who had been relatively muted, have begun to mobilise at local and national level. Second, and perhaps more important, was Tánaiste Simon Coveney’s declaration of opposition to the proposal to allow abortions on request up to 12 weeks.

Coveney, who supports repeal of the amendment, has struggled to explain how he would come up with workable legislation that would allow abortion in cases of rape without legalising abortion on request. But his intervention is significant nonetheless. As the clear winner of the popular vote in the Fine Gael leadership contest last year – Coveney defeated Varadkar by two-to-one among ordinary members – he is an influential figure whose position will give cover to colleagues who are nervous about the 12-week proposal.

These are early days. Repealers in Government will quite reasonably point out that the campaign will not formally begin until the referendum legislation has been passed and the voting date finalised. They will also argue that opinion polls show a clear majority for the repeal proposal, and that most voters tend not to tune into referendum campaigns until late on. That’s all true. But there is no room for complacency.

It has been clear for many years that there is a public desire to change the State’s restrictive abortion regime. But those in positions of leadership must still press the case. Constitutional referendums are easy to lose. If previous examples are any guide, support for repeal can be expected to fall as the campaign goes on.

Pro-repeal politicians, citing the marriage equality campaign as a model, believe civil society should take the lead. It is worth remembering that that campaign was underpinned by political support and heavy backroom involvement by party operatives who helped mobilise networks across the State. Discipline and unity were other key lessons of 2015. If they are to win, pro-repeal advocates must coalesce, fundraise and hone their message – particularly around the 12-week proposal – in a way that speaks to a broad sweep of voters. Otherwise the referendum will be lost.

1 David McWilliams: ‘Ireland is three decisions away from being a perfect country’
2 Two in custody after Ryanair flight to Dublin forced to divert
3 Many people identified as close contacts refusing to come forward for Covid-19 testing
4 My aunt never told us that Gran passed away with no will
5 Mandatory quarantine and flight cancellations unlikely despite rise in cases
Real news has value SUBSCRIBE