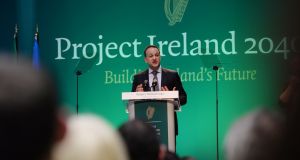 Already, the development proposals set out by Taoiseach Leo Varadkar and his government have been condemned as an assault on small towns and rural Ireland, while favouring the growth of Dublin. Photograph: Alan Betson

The Government has attempted to steer future economic development by folding details of its 10-year National Development Plan into a 20-year National Planning Framework. The two documents are uncomfortable bedfellows at times, because of disparate Cabinet decisions rooted in political considerations, but the broad approach and capital expenditure commitments represent positive developments.

The framework document set out in dispassionate terms what was needed to accommodate a rapidly growing population while, at the same time, moderating the growth of Dublin in favour of regional cities and more balanced development. It generated a fierce reaction from elected representatives in those areas that would not gain immediately. Changes were made. Ministerial demands and plans for rural development were accommodated.

Political and local jealousies derailed previous attempts at spatial planning. A belief that one town’s gain meant another town’s loss caused funding to be spread so thinly that Dublin continued to suck in the great bulk of investment. The current nomination of Sligo, Letterkenny, Athlone and Drogheda/Dundalk as subsidiary development nodes to the cities of Cork, Limerick, Waterford and Galway, echoes that approach. But a number of other initiatives offer hope. Representatives of regions and selected cities are to be given considerable freedom in planning their own development. Capital spending under the 10-year National Plan will be protected by legislation and regional strategies are due for completion by the end of this year.

There is no certainty the minority Government will be able to steer its strategy through the Dáil. Already, its proposals have been condemned as an assault on small towns and rural Ireland, while favouring the growth of Dublin. Large public transport projects in the capital, involving the Metro, Dart and Luas, could feed into that perception. There is no escaping the fact that Dublin will continue to grow faster than peripheral areas. But with sufficient investment in housing and infrastructure, Cork, Limerick, Waterford and Galway can challenge that dominance and anchor development in those regions.

Some parts of the Government’s 10-year investment plan are disappointing. It envisages building 112,000 social homes during the next decade, using publicly owned sites and a new housing agency. It may not be enough. Demand for social housing is expected to rise rapidly during that time, particularly in the nominated cities. By 2040, half-a-million new homes of all kinds will be required to satisfy population growth. Good planning requires difficult decision-making. Local economic advantages and shortcomings should be taken into account to ensure the maximum return from State investment.