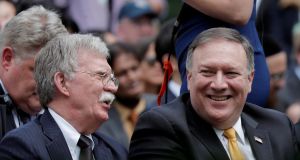 The next meeting between US president Donald Trump and Russian leader Vladimir Putin will not take place this year, the White House has said.

“The president believes that the next bilateral meeting with president Putin should take place after the Russia witch hunt is over,” national security advisor John Bolton said, confirming that the meeting will instead take place next year. Press secretary Sarah Huckabee Sanders announced last week that Mr Trump had instructed Mr Bolton to invite the Russian leader to Washington in the autumn.

The about-turn comes amid ongoing controversy over Mr Trump’s meeting with the Russian president last week in Helsinki.

The White House made the announcement just before secretary of state Mike Pompeo’s visited Capitol Hill to brief the senate foreign relations committee on the Helsinki summit.

In a statement issued ahead of the hearing, Mr Pompeo says that the United States “rejects Russia’s attempted annexation of Crimea”.

“Russia, through its 2014 invasion of Ukraine and its attempted annexation of Crimea, sought to undermine a bedrock international principle shared by democratic states: that no country can change the borders of another by force,” he said.

Meanwhile, Mr Trump hit out at his former lawyer Michael Cohen after CNN broadcast an audio recording of a conversation between the two men from September 2016.

The network aired a two-minute recording of a conversation that was seized by the FBI when it raided Mr Cohen’s home and office in April.

The recording reveals the two men discussing a wide range of issues, including an apparent reference to a payment to former Playboy model Karen McDougal as they discuss buying the rights to a story regarding her alleged affair with the president.

“I need to open up a company for the transfer of all of that info regarding our friend David,” Mr Cohen says, according to the transcript, apparently referring to David Pecker, the head of American Media Inc, the parent company of the National Enquirer, which paid Ms McDougal $150,000 for her story, but never printed it.

“Yes, and it’s all the stuff,” his lawyer replies.

Mr Trump can also be heard saying “pay with cash”, though the audio is muffled.

In a transcript released by the president’s legal team after the CNN broadcast, Mr Trump is quoted instead as saying, “Don’t pay with cash.”

The recording also reveals Mr Cohen congratulating the then presidential candidate about recent poll numbers, an indication of the central role played by Mr Cohen in the presidential campaign.

Any proof that Mr Trump knew about efforts to pay Ms McDougal, who claims she had a 10-month affair with the president, could leave the president open to charges of illegal campaign financing.

Mr Trump took to Twitter on Wednesday to criticise his former lawyer and fixer.

“What kind of a lawyer would tape a client? So sad! Is this a first, never heard of it before?” he wrote, continuing: “Why was the tape so abruptly terminated (cut) while I was presumably saying positive things? I hear there are other clients and many reporters that are taped – can this be so? Too bad!”

The president’s lawyer Rudi Giuliani defended him on Fox News, insisting that the recording did not prove any criminal activity. “It’s outrageous that someone would tape his client surreptitiously and it’s also foolhardy for them to yell and scream and make believe what’s on the tape,” he said.

The development could suggest that Mr Cohen is co-operating with investigators. The tape recording was released by his lawyer.

Meanwhile, it has emerged that hundreds of parents are yet to be reunited with their children, following last month’s reversal by Mr Trump of a controversial immigration policy which saw immigration agents enforcing separations on the southern border. A judge in California has given the government until Thursday to reunite 2,551 children with their parents.

At a court hearing earlier this week, lawyers for the government said that 1,637 parents were eligible for reunification, but 914 are deemed ineligible. It is understood that those deemed “ineligible” may have criminal records or be in custody.

Up to 463 parents may have been deported without their children, the court heard.

Mr Trump was forced to back down on his controversial immigration policy following a global outcry. Despite the president signing an executive order outlawing the practice last month, officials have been struggling to reunite immigrants with their children, some of whom were sent to care homes in different states around the country.