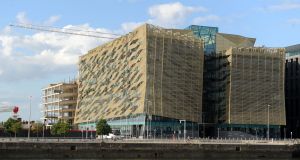 ‘The Central Bank plans to introduce a new framework that would set conduct standards for staff and is planning more frequent supervision.’ Photograph: Aidan Crawley

A Central Bank report on the behaviour and culture of Irish retail banks has found that all have “significant distances to travel” in fully embedding a consumer-focused ethos. The only mystery is that it took it so long for this report to be commissioned.

It is almost a decade since taxpayers bailed out the domestic banks for a combined €64 billion as the State was brought to its knees as a result – in large part – of the incompetence and, in some cases, criminal acts of senior bankers. Yet it was only in October 2017, amid mounting controversy over a tracker mortgage scandal, that the Government mandated the Central Bank to examine the sector’s behaviour.

To date, the tracker mortgage scandal, which saw account holders denied cheaper mortgage rates after the crash, has cost the banks €557 million in redress and compensation, and more than €1 billion when internal costs are included.

This report examined AIB (including its EBS and Haven subsidiaries), Bank of Ireland, KBC, Permanent TSB and Ulster Bank and found a lack of focus on consumers, a continued “firefighting” mentality, deficiencies in leadership styles, a lack of diversity and a need to empower senior staff to make decisions. In response, the Central Bank plans to introduce a new framework that would set conduct standards for staff and is planning more frequent supervision.

An effective banking culture is essential because of the major role played by financial institutions in the economy. Corporate culture comes from within an organisation and is driven by its leaders. It should ensure that common standards of professionalism, honesty, integrity and accountability are maintained to deliver fair outcomes for consumers.

In response to the report, Bank of Ireland chief executive Francesca McDonagh said a healthy internal culture “drives staff engagement and becomes a magnet for talent” adding that a “good culture creates great customer outcomes”. These are fine words but if trust in Irish banks is to be restored, a long road lies ahead.

1 Coronavirus: 20km travel limit may be scrapped early as Ireland moves to exit lockdown
2 California police fatally shoot 22-year-old man on knees with hands up
3 ‘Get the eff out of this country’: Irish racism, as heard on Liveline
4 Covid-19: Wage subsidy and unemployment payment extended to end of summer
5 Donald Trump is in trouble, and that could spell very bad news
Real news has value SUBSCRIBE