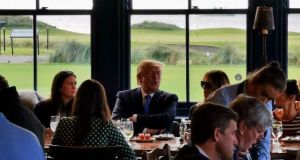 US president Donald Trump seated beside his wife Melania and White House press secretary Sarah Huckabee Sanders in the restaurant at his hotel and golf resort in Doonbeg on Thursday evening. Photograph: Stephen Kearon

US president Donald Trump had a “relaxed dinner” with a small number of guests inside the Trump International Golf Links and Hotel in Doonbeg on Thursday night.

Mr Trump and the first lady Melania Trump dined in the hotel restaurant where guests were served fish and chips, burgers, sirloin steak and sea bass.

Stephen Kearon, a former Fianna Fáil government advisor, was present for the meal and said security was relaxed and very few people bothered the president as he enjoyed his meal.

“The security wasn’t too bad, there were only four secret service people around the president that I could see,” Mr Kearon said.

“He arrived around 7.30pm; I would say the place was 70 per cent full. He had his meal and as he was leaving he had a quick word and walked back into the hotel.”

Mr Kearon said the menu featured fish and meat dishes, while cocktails such as pina coladas were also served to guests.

“It was a very relaxed meal. People were not stopping him, or acting starstruck.”

Mr Trump was seated beside his wife Melania and White House press secretary Sarah Huckabee Sanders in the restaurant which overlooks the 18th green of his golf course on the Atlantic Ocean.

Despite hopes among some locals that Mr Trump could make an appearance in the town on Thursday evening, journalists travelling with the president were told there would be no further public engagements on Thursday.

Mr Trump is expected to play golf on Friday morning before departing from Shannon Airport at about 2.30pm.

Mr Trump’s sons Donald and Eric are understood to have returned to America earlier in the day from France.

A few hours earlier, first lady Melania Trump described Ireland as a “beautiful place”, as she returned to Doonbeg for the final night of her European visit.

In a statement, Mrs Trump thanked the performers who participated in a cultural event at Shannon Airport on Wednesday, which was also attended by Minister for Culture, Heritage and the Gaeltacht Josepha Madigan.

“Thank you to the performers for sharing your talents with me,” she said. “Ireland is a beautiful place and I enjoyed the opportunity to experience these unique Irish traditions.”

She also thanked Shannon Heritage for hosting “this lovely event”.

Mrs Trump attended the performance while her husband attended a bilateral meeting with Taoiseach Leo Varadkar in an adjacent room.

The office of the first lady also noted that Mrs Trump had been given a “beautiful floral bouquet by one of the female dancers”.

Mrs Trump accompanied her husband, US president Donald Trump, to the D-Day commemorations in Normandy on Thursday, visiting a restaurant in Caen with Brigitte Macron, the wife of the French president, after the event.

The Slovenian-born former model has been a visible presence beside her husband’s side for most of the five-day visit to Europe.

Mrs Trump stopped at Shannon Airport last year as part of her trip to Africa. Among those who performed for the first lady on Wednesday were local artist Michelle Grimes, who sang “Dreams” by the Cranberries, Chris Rowley of Bunratty Castle & Entertainers who gave a poetic reading of “Aedh Wishes for the Cloths of Heaven”, and members of the Murphy-Ryan family who performed a Sean-nos dance.