Irish Times view on the US election: ‘It didn’t have to be this bad’ 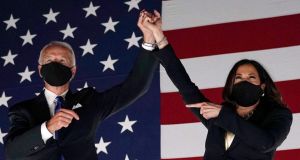 There has inevitably been only one simple unifying theme, a leit motif, to the US Democratic presidential campaign through the primaries and now into the race proper: “Stop Trump”.

Who can best stop this monster? And as the party convention rolled on in virtual reality last week, speaker after speaker, ex-presidents, veteran Democratic pols, dissident Republicans, women, blacks, Latinos, victims of coronavirus, LGBTQ activists, leftists and centrists, and Joe Biden’s running mate Kamala Harris, representing all the strands and causes of American society, were asking the same question, making common cause.

There was, as Gay Byrne used to say “something for everyone in the audience” from the Joe Biden campaign, and each of them in turn, having delivered a blast from and for each of their constituencies at Trump, then paid tribute to Joe Biden, the decent, straightforward guy, the bridgebuilder, a “parable of pressing forward”, as a New York Times reporter put it, through personal tragedy and political setbacks. A man who had waited 48 years of a long political life for this moment.

It was not enough to say that Donald Trump does not have empathy, Joe Biden’s task at the convention was to show that he was cut from a different cloth.

Yes we can, was how Barack Obama put it

Hillary Clinton had lost four years ago in part at least because, although her campaign did a decent demolition job on Trump, she failed to engage personally with voters as the alternative. For many she was viscerally hated.

Biden has to make the positive case for himself politically and personally, and on Friday went a long way in his acceptance speech to do just what Clinton failed to do, engage with voters’ humanity. He asked to speak to those who had lost someone to Covid. He had lost too, he said, recalling his late wife and son’s untimely deaths. “I know how mean, cruel and unfair life can be sometimes,” he said. “Your loved one may have left this Earth, but they’ll never leave your heart.”

In doing so he made his wider case – the election as a moral struggle: between light and dark, inclusion and division, decency and viciousness, caring and contempt. A different way of doing politics. On fighting coronavirus, simply: “It didn’t have to be this bad.”

“History has delivered us to one of the most difficult moments America has ever faced,” Biden told delegates. “The worst pandemic in over 100 years. The worst economic crisis since the Great Depression. The most compelling call for racial justice since the ‘60s. And the undeniable realities and accelerating threats of climate change.

“So, the question for us is simple: are we ready? I believe we are,” he said, echoing a familiar optimistic slogan with a pledge to restore the “soul of America” and erase the “darkness” that had descended on the country. Yes we can, was how Barack Obama put it.