The Irish Times view on the Navalny poisoning: Putin’s Moscow has form 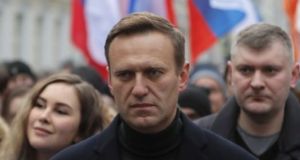 What substance it was that caused Russian dissident and corruption investigator Alexander Navalny’s collapse on Thursday remains unclear.

But deliberate poisoning by the Russian authorities remains the most likely explanation - Moscow has form in dealing with its awkward citizens in this way, and the delays in allowing Navalny’s eventual hospital flight to Germany strongly suggest an attempt to prevent identification of any toxins in his system.

Navalny, who has needled the authorities for years with slick YouTube investigations into the industrial-scale corruption that has proliferated under Vladimir Putin, fell agonisingly ill during a flight from Tomsk to Moscow on Thursday. His plane made an emergency landing in Omsk. A photograph on social media appeared to show him drinking from a cup of tea at a Tomsk airport cafe before the flight and his team suspects a poisonous substance was put in that tea.

While poisoning helps with deniability, it also requires specialised knowledge and complicated planning

Poison has long been an assassination weapon of choice of the Russian security forces. In Cold War days it was regularly used to target dissidents abroad and in recent years a number of opponents of the regime have been attacked.

Navalny was previously poisoned while behind bars in 2019, and attacked in 2017 with a green dye that left him partially blind in one eye. Investigative journalist Anna Politkovskaya claimed she had been deliberately poisoned after drinking a cup of tea on a domestic flight in 2004 - she was shot dead in the street less than two years later.

Opposition activists Vladimir Kara-Murza and Pyotr Verzilov maintain that they too were poisoned, the former twice, in 2015 and 2017, the latter, in 2018. And in notorious attacks on UK-based former Russian spies, Alexander Litvinenko in 2006 was poisoned with radioactive polonium-210, and died a slow death of radiation poisoning.

And in 2018 Sergei Skripal, survived, but both he and his daughter were left ill from Novichok, a military-grade nerve agent, while a man not related to the pair died.

The case against Putin’s agents has yet to be proven this time, but Moscow has hard questions it must answer.