Irish Times view on the treatment of children, home and away 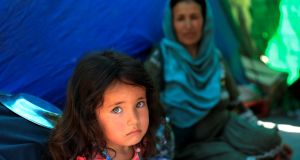 Khosbou (7), from Afghanistan, sits at her family’s tent at a makeshift camp for refugees and migrants next to the formal camp, over the town of Vathy on the island of Samos, Greece, on June 25th. Photograph: Giorgos Moutafis/Reuters

Set against a benchmark of the abuse of asylum seekers and migrants along the US/Mexico border, it would be easy to be complacent about the way people in similar situations are treated in Ireland.

Amnesty International does not accuse our Government of engaging in illegal, mass push-backs; of arbitrary detention and separating children from their parents. That doesn’t arise. Under the Dublin Convention, asylum applications are generally processed in the first EU state migrants reach and those are chiefly around the Mediterranean.

We prefer to look away from what takes place in some of those reception centres.

A decision by the Trump administration to separate migrant children from their parents as a deterrent to other asylum seekers has drawn prolonged criticism worldwide. That response is completely justified. But as wars and persecution displace millions of people, less aggressive anti-migrant measures are also tolerated. Every country has a right to protect its borders. But international law must be obeyed as a minimum.

Human Rights Watch has asked the incoming Greek government to end the unlawful practice of detaining unaccompanied, asylum-seeking children in “protective custody” on the Aegean islands. Families and individuals that made the dangerous sea crossing from Turkey are housed there in difficult, sometimes squalid, conditions.

It may be part of an unofficial agenda to make life extremely tough for migrants in order to prevent the emergence of a “pull factor”. That approach was adopted here for many years, when asylum seekers were denied the right to work and received a minimum amount of financial support. Public pressure, a critical official report and a action that vindicated the right to work for asylum seekers brought about improved conditions. But much more can be done.

At a time of economic uncertainty and a housing shortage, it is difficult to plead the case for additional funding. But the needs of children cannot be ignored: not just the children of families living in direct provision centres. All children need help to reach their potential.

Education is the key to progress, as the Oireachtas Committee on Education reported. It found the existing system did not provide good quality education for the children of lone parent families, Travellers or asylum seekers. These children were “destined to struggle”.

Providing easy access to education at all levels for struggling youngsters should represent the starting point of this exercise. Additional supports, in terms of back-to-school allowances and assistance for school outings, would encourage greater participation.

The cost of books and footwear might be addressed. Outside of school, State agencies should be there to encourage community development. It happens in Nordic countries. Why not here?