The Irish Times view on diversity in the European Commission: a glaring problem 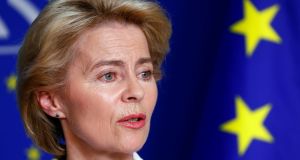 The suggestion by Ursula von der Leyen, president-designate of the European Commission, that each EU state should propose two candidates for the commission – a man and a woman – is a good idea that would help to address a persistent gender imbalance in the union’s policy engine-room. It was first put forward last December by Margrethe Vestager, the current competition commissioner, who was at the time herself a candidate to replace Jean-Claude Juncker as commission president. Vestager pointed out that, in her native Denmark, the practice was common when selecting names for boards and had helped to improve diversity.

The idea is unlikely to go down well among member states, whose instinct will be to guard their prerogative to nominate whoever they like. That has been the thrust of the Government’s response, which noted the proposal before dismissing it out of hand with an insistence that Ireland would proceed with its plan to nominate Phil Hogan for a second term.

If the Government has a better idea for improving the gender imbalance on the commission, now would be a good time to share it. Out of 28 members in the outgoing commission, just nine are women – and that number has not budged in a decade. In 2014, Juncker appealed in vain for more EU leaders to select more women. Some states perform better than others: Sweden has only ever nominated women, but 10 other states, including Belgium and Finland, have only ever chosen men. Máire Geoghegan Quinn, who served from 2009 to 2014, is the only Irish woman ever to have sat around the commission table.

Widening the pool in the way suggested by von der Leyen would not only help increase gender diversity. It would also give the new president more scope to match individuals with portfolios and ensure a better mix of policy and linguistic competence around the table – all of which would make the institution work better. It’s not good enough for the Government simply to stand by its man without setting out its own thoughts on how to remedy an unacceptable situation.