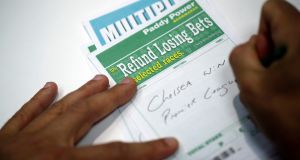 Paschal Donohoe said that it was “timely” to increase the current 1 per cent rate levied on all bets placed in the Republic of Ireland to 2 per cent for all bookmakers.

Bookies face a doubling of betting tax to 2 per cent from January in a move the Government is wagering will raise almost €52 million a-year.

Minister for Finance Paschal Donohoe announced the measure in his Budget 2019 speech on Tuesday.

Mr Donohoe said that it was “timely” to increase the current 1 per cent rate levied on all bets placed in the Republic of Ireland to 2 per cent for all bookmakers.

The Government is increasing its take from the commission earned by betting exchanges, which match punters who bet against each other, to 25 per cent from 15 per cent.

There had been speculation that the Government would increase the tax in the face of pressure from Independent TDs, Ministers and the horse and greyhound racing industries.

Mr Donohoe pointed out that the Government had previously levelled the playing field by extending betting tax to online bookmakers as well as high street bookies.

Following his speech, it was not known if bookies intended passing some or all of the increase in to punters.

The government halved the tax to 1 per cent in 2005 on condition that bookies absorbed the cost of the levy themselves. Mr Donohoe gave no indication in his speech if he believed the charge should be passed on or absorbed.

Legislation originally coupled State cash paid to the horse and greyhound racing industries with the amount collected in betting tax. The levy was designed as a means of ensuring bookmakers contributed to the industries that provided them with the mainstays of the betting businesses.

Solicitor Alan Heuston, partner in McCann Fitzgerald and head of the firm’s betting and gaming group, warned that the move would force bookie shop closures and drive punters to black market operators.

“We’ve already seen a drop in the number of licensed retail premises but this increase may result in further consolidation and closures and subsequently, job losses and a loss of tax to the exchequer,” he said.

Mr Heuston suggested that, as a result, the increase would generate a lot less than the extra €50 million the Government hopes.

“It could also drive customers to black market operators who operate remotely and do not pay the existing 1 per cent rate of tax,” he warned.

1 How much state pension will I get next year?
2 Oxford Covid vaccine trials offer hope for elderly
3 Investors unnerved by Brexit, Covid-19 and US election jitters
4 More financial firms setting up or expanding in Ireland despite Covid-19
5 How long can Government afford to keep State pension age at 66?
6 Neuromod tinnitus trial shows significant results for Lenire
7 Tesco takes to the skies with home delivery by drone
8 Buy one Clinton, get another one for free
9 Stoneweg to develop 397-unit co-living scheme on Cork St
10 All you need to know in the Max Schrems-Facebook case
Real news has value SUBSCRIBE