Irish Times view on Phil Hogan’s exit: master of his own downfall 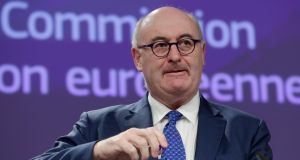 Anger is a dangerous emotion, especially in a time of crisis. To survive the pandemic, we need to stay calm and behave rationally. People in positions of leadership therefore have two clear duties: don’t provoke public rage and, if you do, move quickly and decisively to assuage it. These obligations are matters of public health. The coronavirus cannot be fought unless the necessary measures continue to enjoy the consent of the vast majority of citizens. Outrage corrodes the trust that sustains that consent.

Hogan’s essential argument has been that a negative test for coronavirus gave him an access-all-areas pass to travel around Ireland as he wished. It did not

Phil Hogan failed in both of these duties. By attending the now infamous Oireachtas Golf Society dinner in Clifden, he engaged, however inadvertently, in an act of provocation. If it was not obvious to him that attending a dinner with 80 other people in open violation of the rules that applied to everyone else would incite a strong reactions from the compliant majority, it ought to have been. The insensitivity to the pain and anxiety felt by so many people was grossly irresponsible.

But having helped to inflame public passions, Hogan could still have done much to damp down the fire. Once the story broke last week, he owed the public he serves, in Ireland and throughout the European Union, an immediate apology and a full and frank accounting of what had happened. Instead his contrition was too tardy to feel heartfelt. It was delivered under duress rather than voluntarily. At the same time, his explanations have been shifting and unconvincing and his account of his movements incomplete.

When anger is well-founded, the only way to get rid of it is to address its causes

Hogan’s essential argument has been that a negative test for coronavirus gave him an access-all-areas pass to travel around Ireland as he wished. It did not. Yet even if he were given the benefit of the assumption that this was an honest mistake on his part, his use of this alleged freedom remains baffling. It is hard for the public to make sense of his claim that he was simultaneously playing golf in Connemara and conducting historic trade negotiations with the United States. And none of his claims comes close to explaining why, when he got to the dinner, he did not see the damage it could do.

That damage was done and the imperative is to undo it as quickly and completely as possible. The mood of vengeance is never pleasant, and bloodlust must be avoided. But the overwhelming priority is to reassure citizens that the harsh restrictions that must be imposed on their lives are fair, just and equally applicable to all of us. There has always been a very good pragmatic case for keeping Hogan in place as EU trade commissioner at such a crucial time for Ireland. Yet public health is a pragmatic question too, and in this emergency, it trumps all the others.

When anger is well-founded, the only way to get rid of it is to address its causes. The cause here is behaviour whose offensiveness Hogan never seemed to grasp.