Irish Times view on Covid-19 in Ireland: Suppression is a realistic goal

The Government’s perplexing ambivalence on face masks has sown confusion 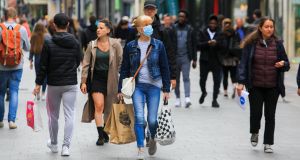 Members of the public wearing facemasks on Grafton Street in Dublin on Tuesday. Photograph: Gareth Chaney/Collins

As restrictions on social and commercial life are gradually easing, the State can no longer rely on the blunt instrument of a lockdown – an effective but unsustainable tool of last resort – to keep Covid-19 under control. Instead it must rely on the more sophisticated weapons in its armoury. They consist chiefly of three things.

First, daily life must be modified to allow for physical distancing and good hygiene etiquette must become the norm. Second, targeted measures will have to be adopted in line with our evolving understanding of the novel coronavirus and the behaviour of the disease. For example, new scientific evidence on transmission patterns could result in some restrictions being reintroduced but others being further relaxed. That constant strategy-adaptation is likely to be a feature of our lives until a vaccine becomes widely available. Third, and most important, is a rapid, effective system of testing and contact tracing so that new cases can be identified quickly and the chains of transmission broken almost immediately.

As an open letter signed by a number of Irish scientists has argued, the suppression of the disease is now, given its relatively low prevalence, a realistic goal. Yet no approach can guarantee total elimination, not least given our land border with the UK and our island economy’s heavy dependence on travel and trade. What is required, then, is the type of system that has succeeded in South Korea, whose ability to hunt down and contain the virus meant it avoided a stringent lockdown yet kept its death rate comparatively low.

What more can be done, then? Big strides have been made on the test-and-trace architecture. The HSE says it now has capacity to carry out 15,000 tests a day, and contact tracing systems are more rigorous and efficient than they were. The challenge now is to make a patchwork system that developed on an ad hoc basis semi-permanent and to ensure that results for those 15,000 tests can be provided within 24 hours. There is also a strong case for regular, systematic testing of essential groups and also of new arrivals in the State – a practice already underway in Hong Kong. That will be expensive, but not as expensive as a second lockdown.

Another key issue is the wearing of masks. The Government’s perplexing ambivalence on masks, in spite of literature indicating their value in stopping the wearer from infecting others, has sown confusion and resulted in strikingly low use among the public of this important public health tool. In addition to their protective qualities, masks are also an important signal of solidarity. As a symbol that the virus is still among us, and that we remain united in defeating it, the mask can serve as an important bulwark against one of the greatest dangers we now face: the danger of assuming the worst has passed.