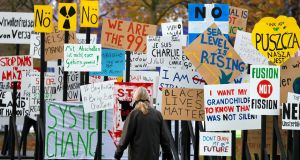 The Citizens’ Assembly is to be commended for its efforts in considering the immensely challenging issue of climate change and what needs to be done if Ireland is to become a leader in tacking global warming. Climate science is complex, with many unknowns.

There is no one solution. As climate campaigner Al Gore has said, “there is no silver bullet”; what’s required urgently is “silver buckshot” where all have to make their contribution. Hard decisions are needed today and the benefits will only be seen by future generations. This makes it difficult for politicians to act.

The outcome of this assembly module could not have sent a clearer message to politicians: dithering and delay is not acceptable given what faces the Earth. The 13 recommendations confront some of the most critical issues that need to be faced by Ireland sooner rather than later. They are bolstered by focus on actions and timelines; elements too often absent in the Government’s (admittedly improved) approach of late. The precision with which members have gone about their task and the strong final positions adopted are heartening. But Ireland has a lot of catching up to do.

There is a striking contrast with Denmark and Scotland which have become leaders in the European context and were the subject of briefings last weekend.

Assembly members did not shirk from confronting the need for meaningful carbon taxes, and there was no question of farmers being given a free pass

Assembly members did not shirk from confronting the need for meaningful carbon taxes to prompt changes in human behaviour, and there was no question of farmers being given a free pass. The citizens took on board radical proposals from agriculture expert Prof Alan Matthews of Trinity College Dublin whose essential point was that farmers needed to change the way they farm to tackle emissions and pollution.

They should be rewarded for success in making their contribution, he suggested, and their enterprises could become more profitable in doing so – an approach the Irish Farmers’ Association insists will damage our largest indigenous industry. It has, nonetheless, already committed to “smart farming” and, reasonably, is seeking clear policy directions from Government backed by appropriate supports and incentives, especially on renewable energy.

The assembly demonstrated that understanding the consequences of carbon emissions is not the main obstacle to progress. It has accepted without equivocation the case for swift, concerted action. This is another indication of people being ahead of politicians in their willingness to take difficult decisions.

We are living in a period that is the warmest in the history of modern civilisation. Irish politicians have been given a citizens’ mandate to take appropriate actions.