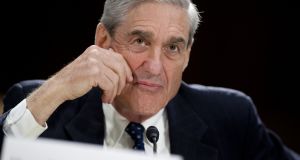 The best decision taken by the Trump administration – the appointment of former FBI chief Robert Mueller as special counsel – is the one that could ultimately prove its undoing. That much is clear from the indictment of three former aides to Donald Trump’s presidential campaign. The newly released court documents confirm four things that were widely assumed and that the White House must surely have feared. These are that Mueller has taken an expansive view of his remit, that he has turned at least one Trump insider, that his team is moving quickly and, crucially, that he has evidence that at least some within the Trump campaign showed a willingness to collude with Moscow to affect the course of the 2016 election.

Whether they actually did collude, and how high knowledge of any such collusion may have gone, are as yet unanswered questions, but the Mueller investigation is still at an early stage.

Ostensibly the biggest catch so far is Paul Manafort, Trump’s former campaign chairman, who has pleaded not guilty to charges that he laundered millions of dollars through overseas shell companies. Rick Gates, Manafort’s long-time associate as well as a campaign adviser, was also charged. The charges against Manafort largely relate to the years before the Trump campaign and to activities apparently unconnected to the current US president. But they carry a penalty of up to 20 years in prison; one possibility is that Mueller is putting pressure on Manafort to provide information on others in exchange for leniency.

Potentially far more dangerous for the administration is the surprise plea agreement of George Papadopoulos, a young foreign policy aide to the campaign. Investigators suspect that Russian intelligence services used intermediaries to contact Papadopoulos, offering “dirt” on Trump’s opponent, Hillary Clinton, in the form of “thousands of emails” that were subsequently made public through Wikileaks. Papadopoulos secretly pleaded guilty weeks ago to lying to the FBI about those contacts and has been a “proactive cooperator” for three months. Anyone in Trump’s orbit who has spoken to him in that period will no doubt be feeling very nervous this week.

The documents Mueller has put into the public domain are rich in intriguing, tactical omissions: names unmentioned, connections blurred, motivation hinted at. One vital detail, either withheld or unknown, is whether and when Papadopoulos told senior Trump campaign officials that Russia had hacked emails that would damage Clinton.

What we do know, clearly and unambiguously, is that Mueller and his team of investigators are assembling a remarkable portrait of America’s democratic system at its most vulnerable. Yet, in his calm, methodical yet ruthless way, Mueller’s work is underlining the resilience of that system’s most important institutions.