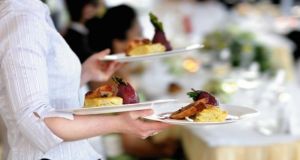 An ESRI study found that women are twice as likely as men to be paid the minimum wage. Photograph: Getty Images

Discrimination against women shows up in many guises and extends from shabby treatment in the criminal justice system to poor political representation levels and inferior pay and promotional prospects at work. Some progress has been made in addressing these long-standing inequalities. But findings by the Economic and Social Research Institute (ESRI) in relation to minimum wage levels underline that more needs to be done.

An ESRI study found that women are twice as likely as men to be paid the minimum wage. And while some of this discrepancy may be accounted for by women in part-time work, particularly in low-paid hospitality sectors, a conclusion of deliberate exploitation appears unavoidable. A pattern emerged whereby foreign nationals were twice as likely to be paid a minimum wage, compared to Irish nationals. Women were similarly disadvantaged in relation to men. And young inexperienced workers were the most affected.

There will be an increase of 30 cent in the hourly rate from January next, when it will rise to €9.55. This recommendation by the Low Pay Commission was criticised as excessive at a time of low inflation by some employers. But it falls well short of a commitment in the programme for government to raise the minimum rate to €10.50. The increase was criticised by Social Justice Ireland on the grounds that a living wage, providing workers with acceptable standards of living, required an hourly rate of €11.70.

Figures produced by the ESRI suggest fewer people than officially estimated are being paid the minimum rate. It reported that 5 per cent of the workforce fell into this category, compared to a Central Statistics Office figure of 10 per cent. Recent growth in full-time jobs is unlikely to account for this discrepancy and the issue warrants further investigation. If minimum pay rates affect a relatively small number of workers in a rapidly growing economy, arguments against increases would lose some of their impact.

The cost of living is higher here than in most EU countries, including the UK, France and Germany. But so also is the minimum wage. In maintaining competitiveness, however, consideration should be given to social equity and the need to prevent the exploitation of workers and of women in particular. That will involve close scrutiny of companies that offer minimum pay and part-time employment in retail; the accommodation and food sectors and in smaller firms. Beyond that, the pay gap between men and women in full-time employment should be tackled. Even though Ireland compares favourably in that regard with the UK and Germany, the average pay differential of 14 per cent that exists in this country cannot be justified. Trade unions, as well as employers, have responsibilities to contribute to a better-balanced and better-paid workforce.

1 One hundred Irish retailers for all your online Christmas shopping
2 Life under Level 5: Where can I go, who can I see, what is closed and what is open?
3 Thousands of gardaí mount checkpoints and patrol parks, beauty spots
4 Lockdown meals: 50 great Irish restaurant food boxes to go
5 Covid-19: Pressure over breakdown in tracing system intensifies as State enters Level 5
Real news has value SUBSCRIBE