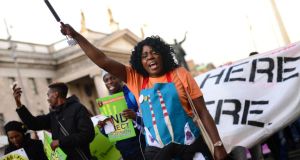 Ellie Kisyombe from Dublin at a rally in the capital last year calling for an end to the direct provision system for asylum seekers. Photograph: Dara Mac Dónaill

The treatment of asylum seekers by successive governments has been shameful: thousands of vulnerable people were sent to direct provision centres; they were denied the right to work and were kept waiting for years for decisions on whether they could remain here. It has taken a ruling by the Supreme Court and a deadline for remedial action to shake the Government out of its torpor. Minister for Justice Charlie Flanagan is expected to bring proposals to Cabinet next week that will allow work permits to be granted in limited circumstances.

Persons waiting for more than nine months to have their initial asylum applications processed will become eligible to apply for a renewable, six-month working permit. This right to work will be confined to “certain but restricted sectors of employment”, although applicants may also become self-employed and access training courses.

Changes to the ban on employment represent a belated acknowledgment that the harsh measures of the past two decades cannot be justified, even on the grounds that less restrictive rules might constitute a “pull factor” for immigrants. Two years ago, an inter-departmental group headed by Mr Justice Bryan MacMahon recommended that living conditions for asylum seekers should be improved, along with their weekly allowances, and they should be permitted to work after nine months. But it took a Supreme Court ruling that employment involved a constitutional right and was “part of the human personality” to bring about a legislative response.

Civil agitation has helped to improve conditions for asylum seekers. Subsistence payments have risen; children have access to education and the numbers waiting for more than five years to have their applications processed have fallen dramatically. But political and administrative reluctance to provide the kind of supports Irish emigrants once received in similar circumstances remains. That is reflected by the intention to limit employment to certain economic sectors and to review the situation if asylum numbers increase, or should unemployment levels rise.

1 Gardaí suspect botched murder attempt was bid to avenge Mulready-Woods death
2 Who are Ireland’s 17 billionaires?
3 Election 2020: FF edges ahead of FG as SF surges in new Ipsos MRBI poll
4 Rob Delaney: ‘As my career took off, my son got sick ... And then he died’
5 Fintan O'Toole: Safety-first politics has had its day
Real news has value SUBSCRIBE