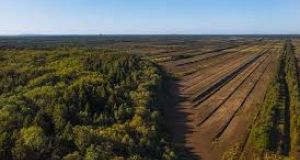 The Environmental Protection Agency’s recent assessment of our environment pulls no punches: if we continue with business as usual, we will collapse the natural supports that sustain our economies, and our lives.

“Climate change, and the disruption that will flow from it, is influencing the established economic, social and natural structures of our world,” says the EPA’s latest report. “We are also witnessing the erosion of ecosystems and biodiversity on an unprecedented scale. We seem unable to stem the tide of nature’s destruction and may not fully understand its full impact until it is too late.”

But are we, really, “unable” to reverse this tide? The blunt truth is surely that humanity has mostly been unwilling to do so. Environmental science, and especially restoration ecology, has offered us very good tools to reconstitute many of the ecosystems we have degraded so critically. But we have not been adopting them nearly fast enough.

Nevertheless, there are now tentative signs we are learning to use them on the kind of scale that could create a society that is, to use a word often abused shamefully, sustainable – one that “meets the needs of the present without compromising our future”.

The Government’s recent investment of €108 million in Bord na Móna’s new large-scale bog rehabilitation scheme shows where we need to be moving.

Of course projects like this, even scaled up, will not be enough. We also need to rethink what “the needs of the present” really are. Consumer capitalism, now embraced from China to Washington, is based on a demonstrable illusion: that our planet’s natural capital is infinite. It promotes a depressingly impoverished notion, that happiness means owning more stuff. This is a high road to environmental collapse.

But while we ponder, as we must, what kind of economic and cultural system might indeed be sustainable, it’s also vital to grasp that there are many measures we can take right now to begin to restore our wrecked landscapes.

Are there really? When I first encountered the idea of ecological restoration on a degraded prairie in Iowa in 2003, I thought this concept was wishful thinking. When we converted our environment for production or occupation, wasn’t that a one-way street? Could we really restore something as complex as an ecosystem?

I had grown up, like most of us, thinking that our relationship with the environment offered only binary options. There was the exploitation/development model and the preservation model, and never the twain shall meet.

We exploit the environment, as all species must, to survive. But as our civilisations grew more complex and populous, development destroyed ecosystems. So we lost the services they provide, from clean air, water and food to recreation and well-being. This often caused local crises but there always seemed to be more land, to start again.

Finally however, industrialised cultures pushed into the last limits of what Europeans fondly thought of, disregarding their indigenous human inhabitants, as “wilderness”.

So the preservation movement was born: national parks and nature reserves were created. We were building walls, making the natural and human worlds mutually exclusive, a kind of environmental apartheid.

What I saw in Iowa in the US suggested a third way. We can engage with nature for its benefit and ours, managing great tranches of land so that they revert to something at least close to their evolutionary pathway. Tallgrass prairie, which had created the deep and fertile black soil so productive for US agriculture (before it was exhausted) had almost vanished from this region.

But a new science, restoration ecology, plus a lot of sweaty labour by citizen volunteers, was carpeting large areas with dozens of plant species previously consigned to extinction. They were even, where feasible, bringing back the buffalo.

It turned out that this movement was not just an exercise in midwestern nostalgia. Broadly similar projects were arising across the world, returning mangroves to Vietnam, tropical dry forest to Costa Rica, biodiverse eucalyptus forest to a devastated mining site in Australia – and recovering native woodlands, peatlands and Burren uplands in Ireland. Many of these projects sequester carbon, mitigating climate change.

Restoration successes have now spurred the UN to declare next year the first in the Decade on Ecosystem Restoration. The challenges are undoubtedly enormous, exacerbated by climate change, population growth, land use change and the spread of alien invasive species.

Perhaps the biggest danger is that governments and corporations will stick the now trendy restoration label on projects that are merely cosmetic.

However, the Society for Ecological Restoration has recently produced a set of detailed principles and standards that demonstrate how a range of restorative measures can be effectively applied across different cultures, ecosystems, and scales.

And these principles can be applied at a scale as local as your own garden or apartment balcony. For example, planting an appropriate native (rather than exotic) plant helps restore pollination services .That’s a first step almost everyone can take. Another step could be talking to your local councillors, businesses and TDs, pushing them to make the decade of restoration a reality on a grand scale, not just another pious UN aspiration.

At a moment of great, and well-grounded, existential anxiety, ecological restoration offers an equally well-grounded and energising message of hope.

Paddy Woodworth is a member of the Society for Ecological Restoration, and author of Our Once and Future Planet: Restoring the World in the Climate Change Century (Chicago, 2013).

3 Laura Whitmore: ‘I’ve had enough of being trivialised and gossiped about’