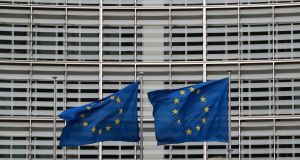 More than 20 million people or about 4 per cent of EU inhabitants are from some other member state and that percentage continues to grow. Photograph: Ludovic Marin/AFP via Getty Images

In a recent article, journalist and Balkan expert Tim Judah drew attention to some disturbing demographic projections. By 2050, with 22 per cent less inhabitants, Croatia will be a poor country of old people with nobody to support them, he predicts.

If it is of any consolation, Croatia is not alone in this predicament. Today, more than 20 million people or about 4 per cent of EU inhabitants are from some other member state and that percentage continues to grow. In the next few decades Bulgaria will lose about 39 per cent of its population, followed by Romania with 30 per cent and Poland with 15 per cent. From the countries outside EU, both Bosnia and Herzegovina and Serbia will lose about one third and Albania 18 per cent.

Depopulation is far from a new phenomenon in the Balkans, from the mass emigration to the US in the early 19th century to the gastarbeiter (guest workers), who in hundreds of thousands left Yugoslavia for Germany and other western European countries in the late 1960s and 1970s, thereby saving the Yugoslav economy.

While many never returned, the balance at the time was kept by a high birth rate. That has now changed and with the wars in former Yugoslavia in the 1990s, Croatia lost more than 300,000 inhabitants, either as war victims, refugees or emigrants. Finally, the latest migration wave to the West has meant that the population has fallen under four million.

However, the new wave of intra-European migration is different from the previous ones. Now, for the first time in history, this part of Europe is experiencing a real brain drain. Previously, those who left were unskilled manual workers, now they are the most qualified; from the infamous “Polish plumbers”, who scared France a few years ago, to electricians, technicians and various IT experts.

No less than 32 per cent of these mobile EU citizens (that is the term used) have university degrees. A ratio like this is unprecedented and meanwhile, Bulgarians and Romanians are almost left without both specialised physicians and nurses. The problem is of such a magnitude that a former Romanian minister suggested to legislate against emigration lasting longer than five years.

Nationalist governments...  keep appealing to people’s patriotism instead of securing those basic needs that would keep young and educated people and families at home, like jobs and housing loans

What’s more, today young people don’t leave alone but take their family; a clear indication of their intention not to return. Even their motives have changed: according to various research and surveys, reasons for leaving are no longer exclusively economic, but social as well, such as corruption, injustice and lack of hope for a better future.

While the West compensates for at least some of the lack of workforce with immigration, and for example Poland receives many Ukrainians, small countries in the East have a problem. Here, ethno-nationalism prevails and the fear of the vanishing of the nation is strong.

For those for whom 1989 also marked the formation of an ethnically homogenous state, immigrants from out of Europe are not an option. Instead, the idea to restrict emigration surfaces is in no way alone: about half of the Hungarians and Poles share his wish, note Stephen Holmes and Ivan Krastev in their recent book The Light that Failed.

So far, national strategies are failing because nationalist governments supported by both the Catholic and the Orthodox Church keep appealing to people’s patriotism instead of securing those basic needs that would keep young and educated people and families at home, like jobs and housing loans.

In the end, it’s not that hard to figure out: people would stay if they could see a future for themselves and their children. But this is the last thing that governments deliver. Instead their lies and empty promises feed mistrust in the political elite – which in turn becomes yet another reason to emigrate.

In the face of falling birth rates, reforms such as those in Finland, where health and social affairs minister Aino-Kaisa Pekonen earlier this month announced the introduction of seven-months equal paid parental leave for each parent, are bound to be effective.

However, they are not realistic for Eastern Europe. In Croatia, the government recently formed a new ministry for demography, social policy and youth to deal with the crisis. But even if such a ministry could come up with a set of meaningful initiatives, there will be no money available to implement them.

In December, a Croatian member of the European Parliament became the European Commission’s new vice-president for democracy and demography. Dubravka Šuica, a former mayor of Dubrovnik, is not known for her contributions to either of the fields for which she is now in charge. It will take time before she and the European Commission take note of the demographic revolution that is under way in Europe.

Slavenka Drakulic is a Croatian author. This column is published in collaboration with VoxEurop

1 Coronavirus: Varadkar returns to practising medicine to help during crisis
2 Restarting Ireland: When and how will we ‘get back to normal’?
3 Donald Trump’s clown car administration has put the fear in all of us
4 Coronavirus: Boris Johnson in hospital for tests as symptoms persist
5 Robbie Lawlor profile: A feared criminal with a long list of enemies
Real news has value SUBSCRIBE