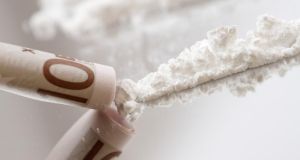 ‘We are basically telling the future children of Ireland: ‘Hey kids, it’s okay to shoot up or snort a line of cocaine – but remember, just a small amount.’’ Photograph: Getty Images/iStockphoto

This week we heard about a possible plan to decriminalise possession of small quantities of drugs including heroin, cocaine and cannabis for personal use. Taoiseach Leo Varadkar and Minister for Health Simon Harris both support such a move, which would put Ireland on par with countries such as Portugal which decriminalised such possession some years ago.

For someone such as me, in the Generation Y or millennial category, the plan is sending the wrong message to a generation that already feels it is acceptable to engage in high levels of recreational drug abuse.

Millennials are already a generation that knows no boundaries

So why is the Government supporting the possible decriminalisation of small quantities when we are already a generation that knows no boundaries. We are basically telling the future children of Ireland: “Hey kids, it’s okay to shoot up or snort a line of cocaine” – but remember, just a small amount.

A catchphrase of millennials nowadays is #Livingmybestlife, but recently I have begun to wonder if this is really true.We live in a moment where we share all our lives on social media platforms, we tell the world what sort of avocado toast we have eaten for breakfast and where we have been for a walk. But are we ready to see the Snapchat pictures and videos of a new generation shooting up because it’s not criminal?

While decriminalisation may not be legalisation, this is the message being perceived by Generation Y.

While living our so-called “best lives”, we are still engaging in mistakes of the past such as drug consumption, especially at occasions such as music festivals, and why not when the Government seems to want to encourage a more liberal identity for us?

We all know our new Taoiseach enjoys making an appearance at music festivals such as Electric Picnic or the recent Pixies concert in Trinity College Dublin, but I would encourage both the Taoiseach and the Minister for Health to open their eyes the next time they go to a music festival.

If they do, they will see a generation of young adults and, worse, teenagers engaging in dangerous recreational drug-taking. Dangerous to the point that they have passed out, or are engaging in sexual activity in front of hundreds of people, or putting their lives at risk.

It’s a frightening experience to see adolescents in a collapsed state surrounded by a group of friends panicking because they know they have messed up, but it’s not uncommon.

The last music festival that I attended, I witnessed a group of young teenagers no more than 18-years-old surrounding a friend who was lying on the ground who had clearly taken drugs and collapsed.

As the paramedics arrived to tend to the young woman, her friends stood in a panicked state.

“Do you think she’s going to die,” I remember hearing one girl whimper while another told her to shut up and act normal.

They knew at that moment their actions were wrong and what seemed like a harmless, carefree experience of their generation had ended in an ambulance and a trip to hospital for the young woman.

Is this sight going to be made any better if we allow the decriminalisation of drugs? I think not.

They know that drugs are dangerous and they know that one moment of madness can have life-altering effects, yet we are thrill-seekers and want to experiment just as Generation X did.

The type of drugs being used depends on the type of festival you are attending. Amphetamine, MDMA and ecstasy are used for the average festival-goer who wants to experience euphoria, but for the more hardcore reveller ketamine and other tranquillisers are being used.

Generation Y is the “pick ’n’ mix” generation; for us drugs are not proscribed or mysterious but rather are as commonplace as beer was for our parents.

Is lying in a collapsed state in a field from a pill really the picture of #livingmybestlife? Or is it, sadly, an image of a new generation that is being encouraged to take such risks and potentially making this behaviour legal?

I would ask our Taoiseach and Minister for Health to don their best floral shirts for Electric Picnic in September but to leave the rose-tinted glasses at home and look at what the youth of Ireland are really getting up to.

Then come back to us and tell us if the decriminalisation of any amount of drugs could be a good idea.

1 Bank leaked my loan request to family who tried to rip me off
2 Why Sinn Féin will not call the State by its name
3 Spread of coronavirus triggers European travel curbs
4 Anti-social chants bringing sour note to schools rugby
5 Costa living: ‘Move home to Ireland? I’d hate it’
Real news has value SUBSCRIBE