Spanish democracy in the dock as trial of Catalan separatists starts 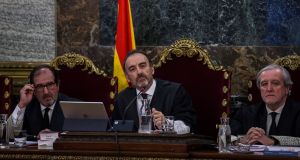 Judge Andrés Martínez Arrieta, president of the court Manuel Marchena and judge Juan Ramón Berdugo during the trial of 12 Catalan separatist leaders in Madrid yesterday. They are on trial for their roles during the failed bid to get Catalonia to secede from Spain in October 2017 and could face up to 25 years in prison. Photograph: Emilio Naranjo/Getty Images

This week, the Spanish ambassador to London made a most unusual statement.

He described the high-profile trial of 12 Catalan nationalist leaders, which opened at the Supreme Court in Madrid yesterday, as an event of “paramount importance to Spain’s reputation as a modern democracy”.

It was an extraordinary, if unintentional, acknowledgement that the Catalan independence movement, flawed, fractured and failing as it is, has succeeded in one thing.

It has turned the indictment of its leaders, on charges of rebellion, sedition and even criminal organisation, into a test for Spanish democracy in the eyes of Madrid’s European partners.

Throughout the long Catalan crisis, which has been crassly and irresponsibly mishandled by both the central government and the independence movement, EU spokesmen have made two things clear: Brussels does not look favourably on secession within member states; and it does not accept the Catalan nationalist claim that “Spain is not a democracy”.

But, and this is a very big but, Spain’s European friends have been very uncomfortable, at several moments, at Madrid’s response to the upsurge in support for Catalan independence. This trial will bring all these points back into sharp focus, again and again, over several months.

It will not help that the “public prosecution” in the trial – a unique Spanish arrangement that facilitates citizen participation in justice –is being exercised by the new far-right party Vox, alongside state prosecutors.

EU observers’ unease about Catalan issues dates back to 2010 when an enhanced Catalan statute of autonomy, democratically endorsed by both the Catalan and Spanish parliaments, was shredded by the constitutional court, at the urging of Spanish conservatives.

It’s sadly true that the Spanish judiciary has periodically failed to give a convincing appearance of independence.

When prisoners from the Basque terrorist organisation ETA became due for release in the early 2000s, government ministers called for “judicial engineering” to keep them in prison.

If they find the Catalans guilty, and impose the long sentences the draconian charges carry, the Catalan sense of victimhood will be inflamed

The highest courts obliged with a ruling that effectively permitted retrospective extension of sentences. The European Court of Human Rights struck this ruling down decisively in 2013, to the chagrin of Madrid.

The failure of the then PP prime minister, Mariano Rajoy, to engage meaningfully with Catalan nationalism over several years only confirmed Barcelona’s stereotype of Madrid’s authoritarian intransigence.

Meanwhile, Rajoy irresponsibly used the Catalan movement to whip up dormant Spanish nationalism among his supporters, and this nationalism has now escaped the control of mainstream conservatives.

There was certainly also a democratic deficit on the Catalan side. The pro-independence parties had a majority of seats, but not of votes. Yet they pressed ahead in 2017 with an independence referendum deemed illegal by the courts, and violated their own parliamentary regulations to do so.

Nonetheless, the rest of Europe was much more shocked when Rajoy sent in riot police to pull people out of polling booths on referendum day. Dragging a little old lady away from a voting station, whatever its legal status, hardly looked like an exercise in democracy. Matters then appeared to collapse into farce. The Catalan leadership declared independence, but had no plan to implement it.

They were incapable of stopping Rajoy taking over direct control of the region, and were soon wracked by internal divisions.

However, the grave charges of sedition and rebellion brought against their leaders, based around the exaggerated notion that the referendum was a failed coup d’état, gave them new energy, and caused further disquiet in Europe. When some leaders fled abroad, EU states refused to extradite on such charges.

The supreme court has made great efforts to demonstrate that the defendants will enjoy full legal guarantees. But the judges can hardly win.

If they find the Catalans guilty, and impose the long sentences the draconian charges carry, the Catalan sense of victimhood will be inflamed, with unpredictable results. And if they absolve them, the now volatile forces of far-right Spanish nationalism will be equally combustible.

And all this is happening at the moment when Pedro Sánchez’s minority Socialist Party government is on the brink of collapse, after less than a year in office, and elections may be called in the midst of the hearing.

There is now a faint but real and frightening danger that the false Catalan nationalist claim that Spain is not a democracy could become self-fulfilling.

Paddy Woodworth is a journalist and commentator on Spain and author of Dirty War, Clean Hands: ETA, the GAL and Spanish Democracy