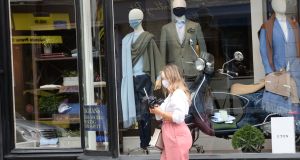 Grafton Street: Many people are adopting a wait-and-see approach before heading to hairdressers, pubs and cafes. Photograph: Alan Betson

The Government is asking us to exercise judgment in order to protect ourselves as Covid-19 restrictions ease. In fact we are being told the importance of our decisions cannot be overstated at this crucial point in the pandemic. Now is the time for personal responsibility apparently. I am not filled with confidence.

We take personal responsibility for ourselves, our families and our finances every day. We have seen this in the way the public has responded and worked with the guidance and directives from the National Public Health Emergency Team, European Centre for Disease Prevention and Control, and the World Health Organisation over the last four months.

In fact there is no reason to believe that the same people who stayed home and took the public health advice are now about to throw caution to the wind. Many people are adopting a wait-and-see approach before heading to hairdressers, pubs and cafes.

Yet it is a fallacy to suggest that “flattening the curve” was driven by good choices or free will or choice. In fact, we have just lived through a period like no other where personal judgment and choice was suspended. Therein lay our protection.

So how did this notion of personal responsibility gain pride of place in our strategy for lifting restrictions? My suspicion is that while this narrative has slithered into popular consciousness on the back of the traditional medical model, it is a product of something far more nefarious.

Globally, the politics of our times, sometimes called neoliberalism, emphasises peoples’ actions as being the product of personal choice. This approach, driven by a desire to reduce state influence in the economy, is particularly useful for covering up systemic failings by the state.

We have lived through a period where personal judgment and choice was suspended. Therein lay our protection

So rather than attending to systemic problems – the lack of personal protective equipment for healthcare workers who make up one-third of the Covid cases nationally, or the need of rural meat factory workers to share lifts – we are told that we need to make better choices.

Is it not more likely that the infection rates among healthcare and meat factory workers are a product of people needing to go to work?

So though we have to remain vigilant in our approach to the virus, we need to be careful this emphasis on personal responsibility does not give rise to vigilante-style questioning about who is and isn’t complying with advice.

This “covidigilantism” as well as being socially corrosive leads us to ask the wrong questions. Both national and international research shows that we are more or less adherent to public health advice at different times. Rather than searching out “the weak-willed” who make “poor choices”, we need to think about the systemic reason underlying the lack of compliance in a particular situation – such as the need to share lifts – and how we can enable adherence.

This is important because, as the phased easing of restrictions occurs, many more of us will be faced with competing demands and difficult decisions. This is perhaps unsurprising as the phased easing of restrictions is aimed at managing economic concerns, as much as public health concerns associated with Covid-19. This was always going to be a balancing act. So if tensions appear, they are a reflection of the multiple concerns both people and governments have.

For example, we have public health advice that people are not to travel abroad on the one hand, but Fáilte Ireland have called for the country to reopen to tourists. Public health versus the economy writ large in a national debate.

The various arms of government and their agencies no longer speak as one. And the first rule of public health messaging is no mixed messaging, avoid doubt, be clear.

To the average person, this lack of clarity is very problematic. Is it dangerous to travel? Is self-isolation on (re)entry to the country a must or not? If it isn’t required for tourists, why is it for those who return from holiday?

And amid this confusion of messaging, we are asked to exercise judgment to act responsibly.

1 Coronavirus: Warning against blame game as 46 more cases are confirmed
2 Why are there so many angry dads?
3 Two people die after car plunges off road and overturns in river
4 John Hume: The mesmerising persuader the public rarely got to see
5 John Hume obituary: Nationalist leader who championed ‘agreed Ireland’
Real news has value SUBSCRIBE