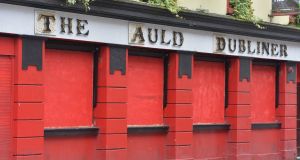 Three out of four Dublin pubs are opposed to restaurants reopening while pubs are forced to remain closed, the Licensed Vintners Association (LVA) said on Thursday.

Almost seven in 10 pubs are willing to reopen with restricted capacity to comply with the expected continuation of public health and social-distancing guidelines, while six in 10 say they will go out of business permanently if asked to stay shut into 2021.

LVA chief executive Donall O’Keeffe said the numbers who said they would be unable to recover from an extended shutdown was a “startling statistic” and a “sad and scary prospect for the entire pub sector” in Ireland.

More than 300 Dublin publicans, representing more than half of the LVA’s membership, participated in the survey, which was issued on April 20th, the day after Minister for Health Simon Harris suggested pubs might not fully reopen until after a vaccine is found.

Some 76 per cent of Dublin pubs would not support a scenario where restaurants were allowed to reopen while pubs must remain closed, saying food providers must be treated equally.

Mr O’Keeffe said it would be “discriminatory” if this was a feature of the Government’s lockdown exit plan.

“Most Dublin pubs have restaurant licences and believe they will be able to implement the same approach to the guidelines as adopted by the wider food service sector. They would also be deeply opposed to a scenario where restaurants were permitted to reopen but pubs who serve food had to stay shut,” he said.

“We are already starting to see a massive outcry across the Irish pub sector about different rules potentially being applied to restaurants and pubs.”

Some 68 per cent of Dublin publicans said they would prefer to reopen with reduced capacities that allow for social distancing than to wait many months for unrestricted trading.

This preference was despite clear concerns about the commercial viability of trading with capacity restrictions, the LVA said.

“Any restricted opening along these lines will involve a significantly reduced capacity and a dramatic change to the pub experience as we know it,” warned Mr O’Keeffe.

“However, if this can be implemented in other hospitality businesses, then Dublin publicans can adopt a similar approach and want to have that option.”

However, the opposite was true for insurers, with half of Dublin pubs saying they are “appalled” by how the insurance sector has behaved and a further 33 per cent saying they are dissatisfied.

“So far all we’ve had is lip service from some of the insurance companies,” Mr O’Keeffe said.

Three out of four Dublin publicans also expressed their satisfaction with the Government handling of the crisis to date.

Publicans said the health and wellbeing of staff and customers was their greatest concern, followed by the uncertainty around when they may be able to reopen and the future viability of their business.

“Pubs across Ireland are deeply conscious of the need to protect the public health and will abide by any guidelines that are put in place by the Government,” Mr O’Keeffe said.

But the LVA is “massively concerned” that several pubs have already indicated they are unlikely to reopen after the crisis, while most believe they will need Government support in areas such as rates, excise and taxation as well as further assistance from the banking sector.

“Dublin publicans are fully aware of the gravity of this crisis and the many different aspects of society being impacted by this pandemic. Our members have been strongly supportive of the Government response to date,” said Mr O’Keeffe.

“However, as this survey shows, the pub sector is also facing up to the massive economic implications of this crisis and further substantial Government support of the businesses themselves will be needed if we are to come through it.”