Diarmaid Ferriter: Ireland must ensure it does not become pawn in British game

Irish negotiating about Brexit should look to lessons from history 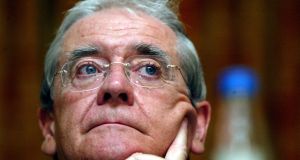 Ronan Fanning: Many of the issues he addressed in his history writing – especially the extent of independence and interdependence in Anglo-Irish affairs – have an added contemporary resonance because of Brexit.

The historian Ronan Fanning, who died on Wednesday, would have relished the opportunity of parsing Theresa May’s much awaited Brexit speech.

The last contribution made by Fanning to public debate was about Brexit, when he declared last June it “represents incomparably the greatest challenge for Irish foreign policy since the second World War”.

During his long career Fanning wrote lucidly about Anglo-Irish relations and was intrigued by the challenges posed by the latest difficult chapter. Many of the issues he addressed in his history writing – especially the extent of independence and interdependence in Anglo-Irish affairs – have an added contemporary resonance because of Brexit.

From the 1970s, Fanning skilfully mined the British and Irish archives to elaborate on the origins of that preoccupation and what it meant in practice; his 2013 study Fatal Path, made it clear, in looking at the attitude of prime ministers Herbert Asquith and David Lloyd George during the Irish revolutionary decade that they were much more preoccupied with how the Irish question would impact on their own party and British politics, than on Ireland, with Ireland as a pawn in the game of their career advancement.

Fanning was also particularly interested in Ireland during the second World War because “no state can claim to be truly independent unless it is in control of its own foreign policy”.

He added: “One measure of the depth of the British dimension is that, for Ireland, independence in this sense has meant independence of British foreign policy . . . if Irish neutrality was in fact something of a sham, Irish foreign policy was never publicly perceived as subservient to British and that was what counted politically.”

In the mid-1980s, with the distressing backdrop of the Troubles in Northern Ireland, Fanning noted wryly the need to confront British-Irish realities: “Britain looms larger in the Irish consciousness than Ireland in the British; this has always been and will remain, among the most significant of these realities”.

He also underlined “the perennial difficulty of commanding British attention”. Handling Brexit has to involve a new look at dependence and interdependence between Ireland and Britain, but also a consciousness of the historical realities Fanning alluded to and whether there is now a need to move beyond them.

Measly bone thrown to the Irish

During the referendum campaign, then Northern secretary Theresa Villiers claimed the CTA between Britain and Ireland means there is no need for a “hard Border” on this island. But the reality is that the CTA would be an external border to the EU as a whole, and what Britain may regard as a better alternative to a “hard” Irish Border may be wishful thinking.

Minister for Foreign Affairs Charlie Flanagan has pointed out that decisions about borders and tariffs will be made “not just by the UK or Irish governments but ultimately also by the 27 EU states”. But can Ireland realistically ride two horses in relation to Brexit?

Or does it need to vigorously place distance between itself and Britain, as a weakened EU would not bode well in the long run for Ireland, already so vulnerable because of Brexit?

In a new era of Anglo-Irish relations, Ireland needs to be sure it does not become a pawn in relation to British political priorities and the Irish negotiating about Brexit should be minded to familiarise themselves with the history writing of Ronan Fanning.