David Cameron made historic errors, but he understood Ireland 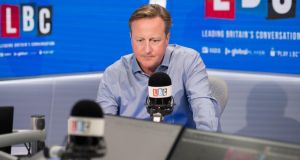 Former UK prime minister David Cameron during an interview on LBC in London to coincide with the publication of his autobiography. Photograph: Stefan Rousseau/PA Wire

History will not judge David Cameron kindly. He is guaranteed a prominent place in the rogues’ gallery of Brexit. Personally, however, I believe that there are worse rogues than him.

Cameron made a historic error in calling the referendum in 2016. That mistake has already done immense damage to the interests and fabric of the United Kingdom as well as to essential international relationships, structures and values. His error was compounded by strategic and tactical mistakes during the referendum campaign, which he acknowledges in his new book, and by his decision to walk away from responsibility in the aftermath of the referendum, which he still justifies. That is a pretty hefty charge sheet. I therefore understand well that Cameron’s name is often the first to come to people’s lips as they contemplate the present Brexit chaos.

My point therefore is not for a moment to proclaim Cameron’s political innocence. Far from it. Rather it is to recall that a deeper guilt lies elsewhere.

Like Tony Blair in relation to the Iraq war, Cameron made one massive, unforgivable mistake from which there can be no redemption in the court of public opinion. Like Blair, he now expresses regret for the consequences of his decision. Also like Blair, however, he cannot bring himself to apologise for the decision itself for that would be to assume a culpability which would cast too dark and indelible a shadow on his conscience.

Nevertheless, we should recall three important things about Cameron; not with a view to mitigating our judgment of his catastrophic decision to hold a referendum without thinking through its profound consequences but rather with a view to offering some context.

First, many of Cameron’s basic instincts were good. His attempt to modernise the Conservative Party, for example, including the legalisation of gay marriage; his acceptance of the norms of democratic and diplomatic behaviour which apparently these days can no longer be taken for granted in Britain; and his appreciation for the importance of expertise, honest advice and rational discourse, qualities now sorely missed.

Second, Cameron understood or at least came to understand Ireland. His handling of the Saville Report into Bloody Sunday, including his speech in the House of Commons which he wrote himself, was a model of judgment, empathy and courage. It was a very far cry from the suggestion that the complexities of the Irish Border are akin to managing London’s congestion charges. Whenever I attended meetings in Downing Street as Ireland’s ambassador in London, I had the strong impression, not just from what Cameron said but from his tone and body language, that he “got” the relationship between Britain and Ireland. A very valuable quality in these times.

Third, and perhaps most importantly in this context, when it came to the final run-up to the 2016 referendum, Cameron passionately told the simple truth about the European Union and its importance for the UK. Of course, he should have started making the case for Britain in Europe much earlier. It was a grave mistake not to start doing so, at the latest, as soon as he had made his 2013 speech announcing the referendum. He promised in that speech to campaign for Britain’s EU membership with, in his own words, his whole heart and whole soul. Yet for three years after that, as he focused on securing limited adjustments to the UK/EU relationship, there was no trace of that heart or soul.

Eventually during the referendum campaign, Cameron found the gumption. He made the case for British interests in Europe intelligently, honestly and even passionately. But it was too late and does not exonerate him from his grave mistakes. Nevertheless, it sets him apart in my eyes from the Leave campaigners who chose xenophobia as their message, the rejection of experts as their method and wilful ignorance as their brand.

Cameron took a casual risk with something very precious. He was a gambler risking the family home on the toss of a coin. He can be accused of being insouciant and nonchalant about important matters with unpredictable and, as it turns out, dire consequences. To me, however, it seems that at least Cameron hoped that the coin would come down on the right side and, in the very end, did what he could to make that happen. Far worse in my book are those who willed and worked for the coin to land on the side which has done so much damage to the UK and further afield and which threatens to do a great deal more.

To apply Cameron’s own eloquent words about Bloody Sunday to the entirely different matter of his own referendum strategy, it was unjustified and unjustifiable. Yet in these febrile days, with populism hammering at our gates, we must be very careful not to let others off the hook.

Bobby McDonagh is a former ambassador to London, Rome and the European Union