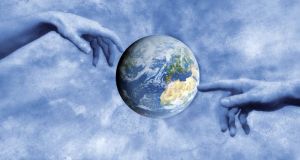 In the climate cult, in contrast to the Christian beatitudes, it is the rich who shall inherit the Earth, living in their A-rated houses and driving their electric cars.

If, as Edmund Burke said, man is by his constitution a religious animal, then it stands to reason that even if he should cast off true religion, the religious sensibilities remain. The need to believe, to be part of a community, to revere moral rectitude, to condemn offences against the moral code: these persist. In the last few weeks, all these features have been evident in the “climate justice” movement. Despite describing itself as based on science, it is increasingly evident that it has become a cult – and a pagan cult at that.

What are some of the hallmarks of paganism? Obvious examples that spring to mind include nature worship, ritual sacrifices and doomsday prophecies, all of which are present in the climate justice cult.

Christianity has always maintained that mankind, as steward of creation, has a responsibility to care for our common home. It is an obligation that is imposed not for the sake of the world itself, but to give glory to its creator and because of the many benefits it confers on us. By contrast, the climate justice cult worships nature. It values the Earth and nature as ends in themselves, subjugating human beings and treating humanity as a problem to be solved for the good of the planet.

Which brings us to the second characteristic: ritual sacrifice. In its less extreme form, this involves quasi-religious practices such as abstaining from meat to demonstrate moral purity and in the hope of satisfying the gods. We have also heard from groups of women on “birthstrike”, who have committed not to bear children – for the sake of the planet. These vestal virgins will ensure that there will be no pitter-patter of carbon footprints on the face of the Earth. We have reached a stage where the young are being encouraged to believe that it is shameful to bring new life into the world.

One of the US Democrat party presidential hopefuls, Bernie Sanders, has even gone so far as to propose abortion as a solution to the problem presented by humanity, which is to say, the problem caused by poor women having babies. In answer to a question concerning how population growth should be addressed as a major contributor to “climate catastrophe”, he immediately cited the ready availability of abortion in the United States as a model for the rest of the world to follow.

This is nothing short of human sacrifice to appease the sun-god. It is the morality of Thanos. In the Marvel cinematic universe, Thanos is the villain whose response to the universe’s resources being overstretched is simply to annihilate half the population.

And as for the prophecies, we cannot escape the lurid warnings of our imminent destruction. Every media report is laden with dark omens, calculated to induce terror, even panic. Unless we repent and change our ways, we are doomed.

This world view is the direct opposite of the Judaeo-Christian tradition. By contrast with the climate justice cult, which values the planet above all else, the Judaeo-Christian tradition puts the ultimate value on the human soul. In the words of Archbishop Fulton Sheen, every individual is worth more than the entire universe. The world and all its beauty is there for the use and enjoyment of human beings. The world will end one day – although, contrary to media reports, it is unlikely to be anytime soon. The human soul, however, lives forever. The universe is God’s gift to mankind. It deserves to be looked after as the common home of the human race. But the climate cult’s propensity to elevate the care of natural resources above the lives of human beings is a subversion of true morality.

Which is why it is so disappointing to see the Catholic Bishops’ Council for Justice and Peace, the men entrusted to carry the torch lit by St Patrick – in defiance of the pagan druids – jumping on board the solar-powered climate justice bandwagon. In a press release, they say they stand with those on the global climate strike, and call for a radical ecological conversion. Another press release from the Catholic Communications Office to mark the “Season of Creation”, states that, unless we listen to David Attenborough, much of the world will be uninhabitable in 100 years’ time.

It is tempting to point out that much of the world is – and always has been – uninhabitable and actually that it is the ingenuity of man that has allowed human beings to live in areas that otherwise would be completely unsuitable for occupation. It is almost as if human beings – even non-believers – were obeying God’s command to fill the Earth and subdue it.

Is recycling to be added to the sins to be confessed by Catholics. If so, into which category must it be sorted – venial or mortal?

Nonetheless, the same press release tells us that “Recycling is no longer an optional habit; it is the very basic and nothing more. Illegal dumping needs to be exposed and uncovered. Incorrect recycling needs to be corrected, what goes where and into which bin.” While I have recycled for many years and support such initiatives, I was of the view that I was answerable to the local council rather than to the episcopate for any failures. Is recycling to be added to the litany of sins to be confessed by Catholics, and if so, into which category must it be sorted – venial or mortal?

Here is the thing: if you have to add another word before “justice”, you are no longer talking about justice. Justice is sufficient unto itself.

In the climate cult, in contrast to the Christian beatitudes, it is the rich who shall inherit the Earth, living in their A-rated houses and driving their electric cars. The poor in developing countries – who often suffer from unreliable electricity supplies and whose hospitals may have to rely on even less reliable back-up generators – will be told “Too bad – no coal or oil-powered electricity for you.” Never mind that the ventilator might run out of power mid-surgery. Better that a human life be lost than risk offending the climate gods.