Wordsworth’s daffodils were not lonely – or even alone

Former rugby player Ollie Campbell said he enjoyed the poem because it was ‘simple, like myself’ 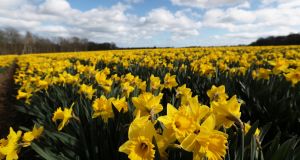 William Wordsworth’s sister Dorothy wrote of the daffodils that it ‘seemed as if they verily laughed with the wind that blew upon them’. Photograph: Russell Cheyne/Reuters

For a poem synonymous with solitude, William Wordsworth’s I Wandered Lonely as a Cloud was a surprisingly collaborative affair.  It was not the product of a poetry workshop, exactly. But if three people constitute a crowd, then there may have been a crowd involved in writing it.

Wordsworth was born 250 years ago this week, on April 7th, 1770. It was 32 years and a week later, during another April, that he saw the now immortalised bank of daffodils as he walked near Glencoyne Bay in England’s Lake District.  He was not walking alone, however.

His sister Dorothy was with him and it was she who first rhapsodised on the scene, in her journal: “I never saw daffodils so beautiful they grew among the mossy stones about and about them, some rested their heads upon these stones as on a pillow for weariness and the rest tossed and reeled and danced and seemed as if they verily laughed with the wind that blew upon them over the Lake.”

It would take least two years before Wordsworth wrote the poem, so it seems highly likely her description influenced his. Even the language is similar. But it’s also on record somewhere that what he considered the two best lines were contributed by a person who wasn’t on the walk: his wife Mary.

These occur in the last verse, the one of most comfort now, when so many people are confined indoors. It begins: “For oft when on my couch I lie/In vacant or in pensive mood”. Then comes Mrs Wordsworth’s contribution: “They flash upon that inward eye/Which is the bliss of solitude.” That word “flash”, by the way, may be one of the poem’s most important. It may also represent the work’s hidden depths, if it has any.  Opinion is divided on this.

In my copy of Lifelines (2006), the popular anthology for which the students of Dublin’s Wesley College asked various celebrities to nominate their favourite poem and explain the choice, “Daffodils” is chosen by two people. One was former rugby player Ollie Campbell, who probably spoke for most readers when he said he enjoyed it because it was “simple, like myself”.

Of its April setting (in the time before coronavirus), Campbell added: “It is springtime, the sun is out though it is not too warm, pretty girls are wearing their summer frocks for the first time AND the rugby season is nearing its club climax! Though excitement is in the air I feel calm and I feel good in myself and with the world. That’s what ‘Daffodils’ does for me.”

The other person to nominate it was broadcaster and author Melvyn Bragg who, by contrast, wrote this: “For me, what gives the poem its deep tap root into our minds is Wordsworth’s description of the process which he calls ‘the inward eye’, on which images ‘flash’ (influence of his studies in electricity at the time) to bring back or provoke a remembering.”

In a later version, Wordsworth glossed the word “flash” to mean “ocular spectrum” (suggesting something you still see when your eyes close). Critics believe the lines may have been influenced by the so-called “Elizabeth Linnaeus Phenomenon”, in which bright coloured flowers seem to flash, especially at dusk. Thought to be electrical phenomenon once, that is now considered just a trick of the eye.

Daffodils aside, of course, the poem is also a celebration of walking, something Wordsworth did a lot. By one estimate, he clocked up 180,000 miles during his lifetime. And as well as supplying exercise and ideas, the habit contributed to his methodology: his feet sometimes beating out what became the meters of his work.

He had a great reputation as a talker too, although not everyone was impressed. On the occasion of one of Wordsworth’s visits to Ireland in the 1840s, the essayist Thomas Carlyle warned that the great poet had a habit of saying whatever was on his mind at any time, however uninspiring this might be. On their first encounter, he recalled, what had been on his mind was London cab fares: “[…] he kept discoursing on how far you could get carried out of London on this side or that for sixpence.”

But then, in general, Wordsworth’s personality was said to be nothing like the pastoral verse would have led you to expect. Hence Carlyle’s mixed compliment (as summarised by the Young Irelander Charles Gavan Duffy in his book Conversations with Thomas Carlyle): “He was essentially a cold, hard, silent, practical man, who, if he had not fallen into poetry, would have done effectual work of some sort ...”