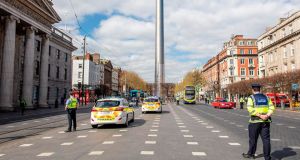 The Government hopes that a combination of awareness of the “last resort” coercive powers granted to gardaí for this holiday weekend, the shaming power of social disapproval of those who flout social distancing rules, and more than 50 checkpoints on roads around the country will make unnecessary the actual use of fines or imprisonment to enforce anti-pandemic measures. Success in this regard may also make it unnecessary for the new powers to be extended for a further period beyond Monday.

Behavioural scientist Dr Peter Lunn argues that while social distancing has massive popular support, perhaps one-in-eight people are nevertheless more inclined to prioritise their own convenience over respect for the social good. Although the majority of these are likely to respond to social pressure, he says, a small percentage may have to be constrained by law.

Minister for Health Simon Harris on Tuesday used his regulatory authority under the Emergency Measures in the Public Interest Act (2020) to enable gardaí to enforce restrictions on non-essential public movement. Breaching the regulations may result in a fine of up to €2,500 or imprisonment for up to six months.

In a liberal democracy, even in an emergency, hard questions need to be asked of government about the necessity for, proportionality of, and the duration of such measures. Reports that such concerns were raised in Cabinet are reassuring, as is the provision in the legislation of a November sunset clause.

In the end, however, the broad acceptability of such powers will be a function of the light touch and common sense of gardaí in their application. But also of a willingness on the part of the public to accept it is necessary, in the best interests of all, to define “essential” movement in ways that may appear harsh or onerous.

So gardaí might choose not to interfere with separated parents visiting their children but, as Garda Commissioner Drew Harris put in on Wednesday, “delivering Easter eggs is not a critical need”. Any more than visiting one’s holiday home.