The government and international community are allowing local activists to shoulder the burden of peace implementation without the critical, corresponding protections 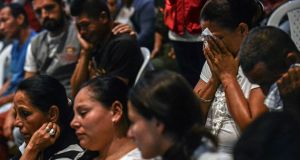 Relatives of 21 victims of the Colombian civil war mourn during a ceremony in which they wake the remains of their loved ones, recently found in different mass graves, in Medellin, Antioquia department, Colombia, on August 18, 2017. / AFP PHOTO / JOAQUIN SARMIENTOJOAQUIN SARMIENTO/AFP/Getty Images

As the final stocks of rebel arms were loaded onto a lorry in northern Colombia last week, President Juan Manuel Santos declared it the “last breath” of the 52-year conflict with the Farc.

The handover of 7,000 weapons was a cornerstone of the peace process signed in 2016, which marked the end of a conflict that killed more than 250,000 people.

The peace agreement won President Juan Manuel Santos a Nobel peace prize, bringing the prospect of stability to a country devastated by half a century of violent conflict. But human rights defenders (HRDs) from South Africa to Sudan will tell you that there is a big difference between peace and justice, and that progress on human rights is necessary to make peace sustainable. Worryingly in Colombia we have seen an upsurge in killings of human rights activists since the peace process was signed last December. A chilling report launched this week by the Colombian NGO Somos Defensores (We Are Defenders), detailed 51 killings between January and July 2017 - a 30 percent increase over the same period last year.

The issue has gone largely unaddressed in international statements commending the peace process, a dangerous oversight given the massive role human rights activists are playing in actually implementing the deal. Activists peacefully defending their communities’ territories from paramilitaries, or traveling to remote regions to educate rural peoples about the peace process, are facing death threats, attacks, and murder.

Assassinations of community leaders, activists, and outspoken human rights campiagners are not new in Colombia. In 2016, 30 percent of the 281 killings of HRDs documented by Front Line Defenders took place in Colombia. The country’s Ombudsman Office reported 156 “social leaders and human rights defenders” killed between January 2016 and March 2017. But even government Ombudsman Carlos Alfonso Negret Mosquera recently remarked that “one of the main causes of this phenomenon is the attempt by illegal armed groups to occupy the territory from which the Farc have withdrawn.”

On 31 July 2017, Front Line Defenders reported a fresh wave of threats from members of Autodefensas Gaitanistas de Colombia (AGC), a paramilitary group operating in the municipality of Barrancabermeja, among others. The group circulated a pamphlet naming several rights groups and five defenders known for their work in the Colombian peace process.

The paramilitary group accused them of colluding with the government and the Farc rebels “against the interests of the Colombian people.” AGC stated that their communities would soon find them “chopped up in plastic bags.” Lest there be doubt about the possibility of gruesome attacks, the group added, “for your knowledge this is not a threat, it is a declaration of war. We are already in the area. You and your family know that.”

A day prior, unidentified people on motorcycles threatened Maria Leonilda Ravelo Grimaldo and her daughter in Barracabermeja, where they were assisting local peace education projects. Lacking any form of state or local protection, the two women fled the workshop. Two days earlier, an anonymous phone call warned HRD Madero Vergel that if he did not stop documenting and denouncing human rights violations, he would be murdered.

A number of factors have led to the rise in activist killings since the signing of the deal. After half a century of conflict, the country’s justice institutions are overloaded, and impunity is rampant. There is rarely a consequence for killing a human rights defender. Additionally, the persistence of paramilitary structures means land rights activists and those working on peace education are still facing armed resistance to their work. And while authorities are beginning to recognize the critical role human rights defenders play in building a stable Colombia, smear campaigns from public authorities still jeopardize activists’ reputations within their communities, which in turn erodes networks of local protection.

The Attorney General’s office has been tasked with addressing with attacks on HRDs, and recently claimed “historic advances” in half of their cases - confusing given that only 5 of their 87 cases have led to convictions. Further, the 87 cases the Attorney General boasts about working on only reflect 2016 and 2017, and stand in stark contrast to the 509 killings reported by local experts like Somos Defensores since 2009.

Numbers are always tricky, and barriers to documentation are immense. Access to remote areas, inadequate police documentation, and fear of reprisals all make reporting difficult for local communities. In response, Ireland has led the way in supporting international efforts to better document the killing of human rights activists, with President Higgins last year inaugurating the Front Line Defenders-led HRD Memorial project in conjunction with Somos Defensores and others.

But at the local level, threats and attacks against HRDs are going largely ignored by the Colombian state. Both the government and international community are allowing local defenders like Maria and Iván to shoulder the burden of peace implementation without the critical, corresponding protections.

On the day of the laying down arms ceremony in late June, EU High Representative and Vice-President Federica Mogherini promised Europe would “encourage and support all steps towards a sustainable and lasting peace, which end violence, empower communities, and bring[-S] security and prosperity to all Colombians.”

The practical embodiment of that commitment - lasting peace, ending violence, empowering communities - means protecting activists who actually do that work. If local communities continue to see requests for protection denied while HRDs are threatened, attacked, and murdered with impunity, they will come to understand that active participation in the peace process equals fatal risks to their lives and their families. And when local communities are too afraid to participate in peacebuilding, the deal has failed. Protection for rights defenders is paramount to success.

Andrew Anderson is Executive Director of Front Line Defenders which protects people who work, non-violently, for any or all of the rights enshrined in the Universal Declaration of Human Rights