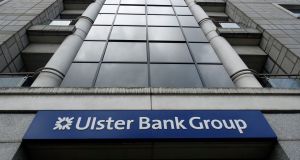 Ulster Bank is pulling out of Ireland. As the economic reckoning for Covid-19 plays out, banks will face big challenges. Photograph: Mikko Pihavaara

The debate about the future of banking in Ireland as Ulster Bank departs needs to be put in the context of what lies ahead; a big economic shakeout as the impact of Covid-19 plays out.

It is going to lead to problems across the economy,including for banks. Temporary loan reliefs granted to borrowers are going to turn into permanent issues. Future competition in Irish banking is a worry, but the looming problem is the fallout from the pandemic.

For a government which already owns a large shareholding in the Irish banks, this will be tricky. The delicate dance we have seen since the financial crisis, with the State owning large shares in the banks but having only limited control over them, is about to get a lot more complicated. In the background, meanwhile, is the political threat of mortgage loans being taken on by international funds – “the vultures” – and the open goal that will present to the opposition, particularly Sinn Féin.

We can safely presume there were a lot of scraps behind the scenes in recent months as NatWest, Ulster Bank’s parent – majority-owned by the UK government – inched towards confirming the inevitable. For Minster for Finance Paschal Donohoe, the announcement of their exit terms was about as good as it could have been, confirming a slow withdrawal and talks with AIB and Permanent TSB about buying parts of the loan book. But there is a long and winding road to go here and it will be shaped by the shock which is going to hit banks as the next act of the pandemic plays out .

Bad debts will be on the rise. As supports like the wage subsidy scheme are wound down, many companies will sadly fold. And with close to one million people supported by either the pandemic unemployment payment or the wage subsidy scheme, we are facing into a jobs crisis. This means problems with both business and personal loans.

We are not heading back to a 2008-style banking crisis. But as the economic reckoning for Covid-19 plays out, banks will face big challenges. It would be a surprise if the regulator and EU finance ministers have not had quiet discussions about the risk of some European banks needing to be recapitalised.

Many of the problems of the Irish banking system date back to the last crisis. Foreign banks scarpered, damaging competition. Bad loans lingered on loan books of the remaining banks. Blame for this can be shared between banks, the regulator and successive governments. One issue has been the lengthy process required to exercise security on a loan. Governments – as bank shareholder and legislator – effectively made a decision not to push this as house repossessions would result.

In turn, the bad loans are one key reason why the regulators – the Central Bank and the EU regulator, the Single Supervisory Mechanism in Frankfurt – have obliged Irish banks to have a higher level of capital than elsewhere in Europe. This means having bigger financial buffers in case things go wrong – but it means lower returns and this has been a big issue for Ulster Bank and its parent, NatWest.

This underlines the precarious position of the State as a major bank shareholder. The Government wants a competitive market for customers, but it also wants banks to be profitable. It means politicians and banks are bashed from all angles – for the fact that loans are dear in Ireland on one side, and the need to protect people in debt and ensure universal banking services on the other.

The trade-offs are rarely addressed – it is, for example, a legitimate societal choice to protect people in bad debt and make repossessions a lengthy and difficult process, but it has implications in terms of the price of loans. It is a choice to make banks have bigger financial buffers in case things go wrong, but this has implications too. It is one reason why Ulster Bank says it is leaving.

That said, given the certainty of pandemic losses in bank loan books, having higher financial buffers than other EU banks may be welcome in the months ahead as pandemic problems start to crystallise. It may help our banking system to dodge a bullet.

Against this backdrop, we see the emergence of a new kind of green jersey agenda. AIB and Permanent TSB are stepping up, no doubt quietly encouraged by their major shareholder, the State, as a way to create bigger domestic players. And keep away the vultures.

But this isn’t straightforward. Talk of creating a “third force” in Irish banking has been around for the best part of 30 years. Basing it on an expanded Permanent TSB ignores the fact that this is a small player, largely involved in one area, mortgage banking, which would need more capital from the State if it was to do a big deal. And if foreign investors feel these moves are driven by a State-directed green jersey agenda, that could create other problems. Meanwhile for the three parties in government, the nightmare is of the vultures swooping in – this would create a big political fuss no matter what these new fund owners actually did.

It is a mark of the troubles of banking globally– crippled by an era of low interest rates exacerbated by the pandemic – that there is no expectation of any outside banking group using Ulster’s exit to get a foothold here. A few years ago, Mario Draghi, then European Central Bank president, characterised the Irish banking market as a “quasi-monopoly.” And the near-monopoly owner will be the State.

These long-term competition factors are a worry. But for now the impact of the pandemic means Ulster Bank’s long goodbye will be messy, with political danger for the Government at every turn as the State goes in ever deeper into the banking sector.