The Irish Times view on media freedom in Europe: a curtain comes down 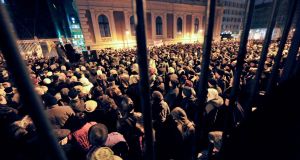 In this photo taken in December 2011, people listen to a speaker in front of Hungary’s public national radio headquarters during a demonstration gathering some 3000 people against the silencing of ‘Klubradio’, an opposition-backed radio station that is being pulled off the air by the country’s media authority, in Budapest. Hungary’s leading independent radio station Klubradio lost an appeal on last week to keep its license after the media regulator NMHH said it had infringed rules, raising new press freedom concerns in the EU member state. Photograph: Attila Kisbenedek/ AFP via Getty Images

Minor infractions of its reporting obligations – a failure in time to inform the regulator of its share of Hungarian music output – have seen Budapest’s popular liberal radio station Klubradio taken off air by the state in the latest in a wave of measures by the country’s government to inhibit the free media.

Takeovers of independent outlets by cronies of prime minister Viktor Orban, the packing of the media regulator with other supporters, the manipulation of state advertising budgets to starve critical voices, and turning state broadcasters into mouthpieces of the government, have all contributed to systematic degrading of freedom of speech.

In Poland, too. A takeover by the state refining company – its board is dominated by government allies – of a company holding 20 of Poland’s 24 regional papers and 120 other local weeklies, and a new tax on the cash-strapped independent media’s advertising revenues, are having similar effects.

The EU has protested such erosions of pluralism but, unlike its court actions against both states over rule of law breaches, has yet to find ways to intervene effectively. Pressure is mounting on the European Commission to use its competition and internal market non-discrimination powers against both Warsaw and Budapest.

But Brussels is also getting mixed messages over its attempts to curb member states’ interference with speech. New legislation, like the forthcoming Digital Services Act (DSA), setting out the responsibilities of Big Tech in policing content on the web, is being criticised by the French.

France wants to see changes to the DSA to give every member state the right to fine tech platforms and force them to remove illegal content. It is also pushing for the DSA to widen controls beyond illegal content to the policing of harmful content and disinformation.

But enhanced national powers to police social media platforms would be manna from heaven to Budapest and Warsaw. It is not a path the EU should go down.

4 Diarmaid Ferriter: We are being infantilised on Covid-19 by an immature Government

5 Coronavirus search: How is Covid-19 spreading in your area?