My mother was ‘pregnant from Ireland’ 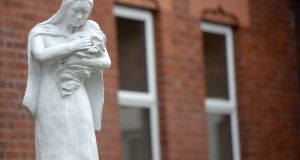 Regina Coeli, Morningstar Avenue off North Brunswick Street in Dublin: Women who became pregnant without marrying were named and shamed with cruel words. We should ask ourselves what it meant by referring to a woman as “fallen”. Photograph: Dara Mac Donaill

Sticks and stones will break your bones, but words can never hurt you. So goes the saying repeated by parents to help their children build resilience.

With the publication of the mother and baby homes report has come the torrid but necessarily close examination of one ugly aspect of a nation’s history. As the Taoiseach said in his public apology, the shame visited upon the women and children of Ireland belongs not to them, but to the State, to the authorities and to the families who cared not for the welfare of their daughters and children.

Women who became pregnant without marrying in the oppressive society of the early 20th century were named and shamed with cruel words. We should ask ourselves what it meant by referring to a woman as “fallen”, when she had done nothing other than that fundamentally noble and wonderful act of becoming pregnant? Why was the man never be described that way? And why is it that in 2021, we still continue to say “fallen” pregnant to describe joyous conception?

In a time of prohibition and censure, a single word could place a person outside of society. Language is a powerful weapon in the marginalisation of cultures. As Ann Curzan, professor of English at the University of Michigan says, “Language asks us to notice particular things” and no more so than when words are used to discriminate.

The analysis and conclusions of the mother and baby homes report bear close reading and attention. It is also right that proper scrutiny is brought to bear on the language used. It is not just what is said, but how. What is the language asking us to notice?

The survivors have waited a long time. I am the least of them: a survivor of a short-term transitional placement in a Catholic home in the UK run by nuns, followed by an adoption brought about for no other reason than the prevailing attitudes of the time. “Tell everyone the baby died and go home to grieve” she was told. What this makes me is a survivor of the shaming of my Irish mother: for being Irish and pregnant. I read this report then on her behalf.

It is hard to put into words how intensely an adopted person will listen – even when reading – for words that tell us we belong, are not forgotten or second-class. We will pay close attention to the words on every scrap of paper that may bear details, be they a name, a place, a reason, as if our life depended on it. And in a way it does. It is a process of locating.

How much more then do words matter to us in this report, which must set the record straight once and for all and pay a debt of apology long overdue? Tell the truth to the survivors. It would be an understatement to say the report makes for anything less than a harrowing read. Chapter 7 details the appalling experience had by the daughters of Ireland abroad.

It is acutely painful to read that, in the early part of the 20th century, a pregnant woman from Ireland had been reduced, by so-called welfare services, to an acronym: “PFI” (pregnant from Ireland). We read that the reason for this was that the numbers of women were allegedly “so great”. Data provided later in the report delivers statistics of women repatriated to Ireland, year upon year, which reveal these were often in double figures, sometimes creeping above 100; numbers of applications made for assistance by women are given, mostly in the hundreds, sometimes higher.

But are we to understand that in say 1926 at a time when the population of England stood at about 38 million and the population of Ireland at nearly three million, it was these numbers alone that reduced these women to a mere acronym? The wording, critical to understanding and resolution, fails to make this clear. To blame numbers is to profoundly misunderstand the way in which social constructs and power work. But in this report, this is not where the failure of language ends.

It must come as a body blow for anyone affected to read on and discover the writers themselves freely using the self-same uglifying and demeaning acronym (PFI) within their textual analysis. Not once, not twice, but several times.

The authors also use the term “get rid of” when describing the fate of the infants of poor women in France in the same period. This, without reference, quotes or any signifier to explain, gives offence where none is due. Are we to be thought of as something that was “got rid of”? What blindness of mind or lazy attitude prevented the authors from seeing that by these words they perpetuate offence?

But a single report does not define where prejudice begins and ends. We still hear the term “single mother” used to imply more than just parenthood. When the current British prime minister, Boris Johnson, in an article in 1995 referred to the children of single mothers as “ill-raised, ignorant, aggressive and illegitimate”, he was embedding misogyny into the term “single mother”.

So the social injury to the women and children of Ireland who are the subject of the commission report is repeated by the report itself. There can be no other explanation in the absence of clarification: whether there was a failure to make reference to historical sources (if that is indeed the reason); or a dereliction of duty to carefully edit; or a failure to include a glossary of terms, some message to the readers of their intention in the language used. We take no comfort in the silence offered to those who now look for explanation.

Judith Trustman is a retired barrister who practised in family law in the UK. She is a writer and poet