Ulster Bank: The crash did what the IRA never could

Despite an openly Protestant, pro-Union ethos, Ulster Bank continued to operate its 61 branches successfully south of the newly imposed Border 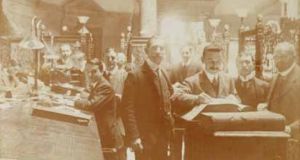 Long before the partition of Ireland, before the violence of 20th century Anglo-Irish relations and before Irish banking became synonymous with failure and bailouts, commercial banks based in Belfast played a key role in the economic development of the entire island of Ireland.

Tracing their heritage back to Belfast’s industrialisation in the early 19th century these banks - Northern Bank founded in 1824, Belfast Bank (1827) and Ulster Bank (1836) - underpinned the development of a competent, stress adverse, Protestant infused banking system which dominated the economic landscape of Ireland until the 1960s.

The impending closure of Ulster Bank’s business in the Republic marks a sad end to Northern Ireland’s important role in financing the Irish economy, irrespective of borders or religious differences. As the last of the Belfast banks operating in Southern Ireland (the Belfast Bank pulled out in 1922, the Northern (Danske) in 2014 - its closure marks another retreat from the traditional Anglo-Irish economic relationships which once dominated Ireland’s economy.

Even after independence and with an openly Protestant, pro-Union ethos, Ulster Bank continued to operate its 61 branches successfully south of the newly imposed Border. Not even the chaos of the so-called 'Belfast Boycott' organised by Irish republicans between 1920-22 seriously damaged Ulster Bank’s business. Recent research highlights that deposits and customers soon returned, even in rural areas often associated with higher levels of sectarian violence.

The IRA conducted a campaign of direct intimidation campaign against Ulster Bank staff. “His sin in the eyes of the IRA is that he is from the North of Ireland and is a Protestant” as the branch manager put it in a letter to his superiors in Belfast about an employee who was intimidated into leaving Belmullet. The campaign did not weaken Ulster Bank’s resolve to remain in business on both sides of the Border. A decision questioned repeatedly by their English owners, Westminster Bank.

Although impeccably superior in their attitudes to the new Irish state, Ulster Bank did ultimately come to terms with financing the Irish administrations in the 1920s. Their pained correspondence to their English owners - “all of us dislike intensely the idea of making any advances to the Irish Free State” stood in marked contrast to a highly profitable banking operation. Of Ulster Bank’s £10.1 million in investments and reserves in 1926 (about £150 million today) only 0.6 per cent were held in the South. A fact underlying the embedded nature of the Irish banks in British financial markets at that time.

Even the coming to power of Fianna Fáil and their nationalist rhetoric couldn’t detach Ulster Bank from its southern business. Although deposits flowed temporarily to Belfast in 1932 and again in the mid-1930s during the Economic War, Ulster Bank remained a profitable bank on both sides of the Irish Border even during the worst years of the Great Depression.

Although often dismissed as a cliché, or lazy stereotyping, the Protestant imbued focus of Ulster Bank (and the Irish banks generally) on probity, honesty and Empire were both real and intensely felt. Bank officials generally had to ask their superiors for permission to marry. Such permission was based on an assessment of their “financial viability” and often withheld. Staff that left the bank to enlist in the British army in the second World War could return to their jobs when hostilities ceased. Those who sought to join the Irish Army simply needed to seek new employment.

Notwithstanding the Border, Ulster Bank continued to run its Northern and Southern operations as a unified business until at least the 1950s. However, it was the consolidation of the Irish banking industry in the 1960s that set the scene for Ulster and Northern Banks eventual detachment from the new Republic.

As written about by Fintan O’Toole in this newspaper over 20 years ago, the creation of the modern Bank of Ireland (absorbing the National and Hibernian banks) and Allied Irish Banks (Munster and Leinster, Provincial and Royal banks) fundamentally altered the approach of the Irish banking system to risk and basic banking principles.

The road from the financial stability and good governance of the Irish banking system in the 1960s to the bailout of 2010 is a strangely linear one. Clear warning signs were posted in the 1990s with the Dirt and Ansbacher frauds. Incredibly, Irish banking regulation weakened, not tightened, in the following decade.

What arose in its place was an oligopolistic banking market fueled by Irish bankers with delusions of grandeur. Even Ulster Bank - a staid old Belfast lender that survived war, intimidation and sectarian bias in Southern Ireland - got caught up in the hype and the erosion of basic banking standards both in Ireland and internationally. Only a £15 billion infusion from its Royal Bank of Scotland parent - which itself was bailed out by the British treasury to the tune of £46 billion - allowed it to limp along for the last decade.

More than anything else the retreat of Ulster Bank from the Republic should be marked as an end to an important element of the Anglo-Irish economy. A system which served both Ireland’s well for many decades. Banking was just one of Ulster’s important legacy’s to our shared island over the past 200 years.

Eoin Drea is a researcher at the Wilfried Martens Centre, the official think tank of the European People’s Party of which Fine Gael is a member. His Phd thesis was on the the development of the banking system in independent Ireland.